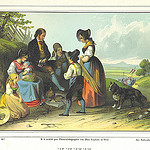 By Conn Ó Muíneacháin on December 17, 2013 in General
0
SHARES
ShareTweet

The British Library has just uploaded a million images to Flickr, and they’re all copyright-free! The images come from books held by the library dating from the 17th, 18th and 18th century which have been digitised by Microsoft. The Library hopes to “stimulate and support research concerning printed illustrations” and plans to launch a crowdsourcing application next year to aid in classifying and describing the content.

As to what people will do with this content, they say they are:

Copyright has long expired on this material, so it is all public domain. And while there is no obligation to attribute the source of public domain material, the Library says it would be nice if people do.