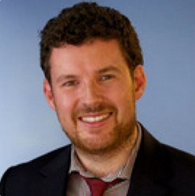 Dr Shane Bergin, Investigator at Trinity College Dublin’s School of Physics and nanoscience institute, CRANN, has been awarded the European Commission’s Marie Skłodowska-Curie Actions (MSCA) achievement award. The award recognises Dr. Bergin’s contribution to communicating science in a fun and attractive way and mentoring the next generation in science.

The European Commission presented the award to Dr. Bergin yesterday during the ‘Empowering the Next Generation of Researchers’ conference of the Italian EU Presidency in Trento, Italy.

The award for ‘Communicating Science’ spearheaded by Dr. Bergin, included an eye-catching poster campaign about physics called “DARTofPhysics” on Dublin’s DART train. This mass outreach effort involved some 50 scientists and 300 students, and caught commuters’ attention by sparking their curiosities and inviting them to visit the campaign website to continue their physics journey.

Dr Claire Belcher, a jury member in her capacity as MSCA winner of the prize in 2012 and now ERC Principal Investigator, said

“Shane’s innovative idea, placing posters raising awareness among train commuters of the importance of physics in everyday life, is simple but elegant. It seems to make so much sense to fill one’s commuter time looking up the answer on their advertised website”

Commenting on his receipt of the award, Dr. Bergin said,

“I am delighted to receive this award. DARTofPhysics sparked a city-wide conversation about physics, showing physics to be creative, inspiring and beautiful. I worked with a large team of scientists, advertisers, students and web designers to bring DARTofPhysics to life. We had so much fun running the campaign.”

“I am particularly proud to represent Ireland and to draw attention to how we make science accessible for all.”