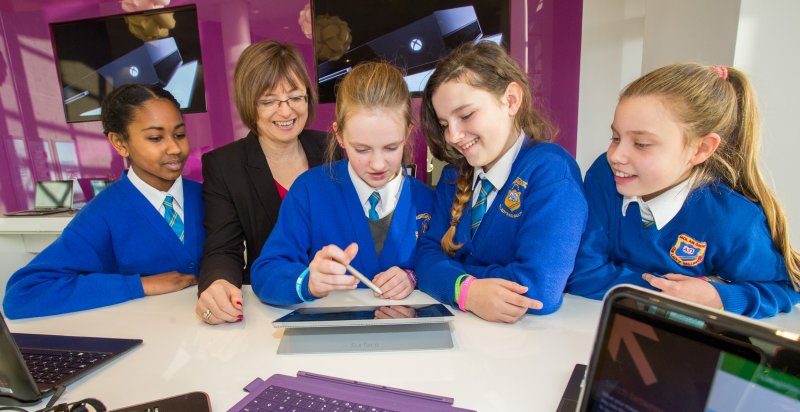 By Conn Ó Muíneacháin on December 8, 2014 in General
0
SHARES
ShareTweet

150 events are taking place across the country this week as part of the global Hour of Code initiative, run by Code.org. As a platinum supporter of the global initiative, Microsoft is taking a leading role in Ireland to help drive awareness of the campaign and to create as many opportunities as possible for people – young and old – to get a taste of coding.

Today Microsoft, with help from many of its 1,200 employees, hosted an event for local schools at its Dublin campus, and partnered with the Arts Council on a special seminar aimed at exploring the role of technology in the arts.

Over the past number of weeks, Microsoft also worked with Digital Schools, Junior Achievement and CoderDojo to get as many Irish events organised and registered as possible for the Hour of Code.

The global ambition for the programme is that ten million students will learn to code on the day.

While the focus is primarily on students, Microsoft is also seeking to open up the opportunity to learn to code to people who have already completed their education and are in a variety of roles across the economy and society.

“Coding is an international language and one which can be used and drawn upon regardless of where you live or work or what your passion is. We believe that learning to code is as important as learning the core subjects in school. Through the Hour of Code we want to create as many opportunities as possible for people to experience a taster for coding through a specially developed 60 minute course.”

“I welcome the opportunity the Hour of Code provides to reach out to a wide audience, particularly those that may not have had any previous experience with coding. It breaks down that initial barrier of unfamiliarity and gets people directly involved in coding. No matter your age or background, coding is open to everyone and I applaud Microsoft for its work in spreading this message to a wide audience. We at Junior Achievement Ireland are delighted to do our bit to encourage young people to take part in the Hour of Code.”