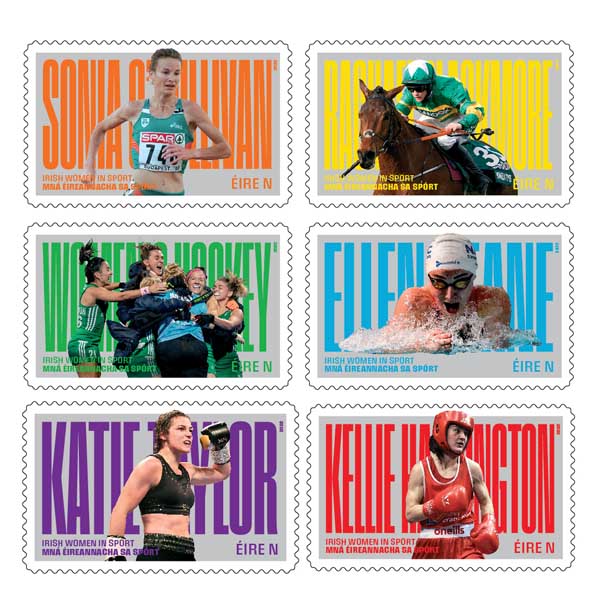 By Michele Neylon on March 3, 2022 in General
0
SHARES
ShareTweet

An Post has announced a new stamp issue which will celebrate women in sport.

Designed by Dublin studio, Unthink, the stamps are a bold design, multi-coloured on metallic silver. Each athletes’ name appears in large font, behind a powerful sporting moment, captured by sports photo journalists from Irish agencies Inpho and Sportsfile and for Getty Images.

Speaking at the unveiling of the stamps with members of the Irish Hockey Team at the GPO, Hildegard Naughton, Minister of State at the Department of the Environment, Climate and Communications said:

“These stamps celebrate the achievements of Irish women in sport – not just here in Ireland but on a world stage. It is especially fitting that these stamps will be issued by An Post ahead of International Women’s Day, which takes places this year on Tuesday, 8th March.

“It is only right and proper that we celebrate the success of Irish women in sport and what better time to do it than to mark International Women’s Day.  I for one have the utmost respect for the Irish women in sport who are key role models to young girls the length and breadth of the country. They demonstrate how strength, resilience and determination can pay off when you, or your team, set a goal and strive to achieve it. We have a lot to be proud of in Ireland when it comes to our female athletes who have led the way for women in sport on the global stage. Long may it last and here’s to boundless success for future generations of Irish women and girls.”

An Post has previously issued stamps marking the achievements of pioneering Irish women and women in literature, while future stamps will feature more sportswomen and mark the success, contribution and resilience of women across Irish society.

In addition to the success of the sportswomen featured on the stamps, there have been a number of historic breakthroughs in women’s sport recently. In Ireland this includes Leona Maguire’s win on the LPGA Tour; double history-making referee Maggie Farrelly on becoming the first woman to referee in the Allianz Football League and Liverpool FC Women’s Captain, Niamh Fahey making her 100th appearance for the Republic of Ireland, joining only three other women in Ireland’s Centurion Club.