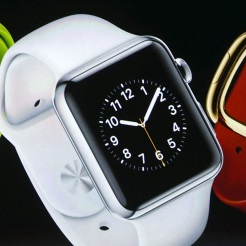 Why didn’t Apple call their new wearable device the iWatch? One possible reason is that the trademark iWatch was already registered and owned by an Irish company.

When Apple CEO Tim Cook announced the Apple Watch last month, he broke with long-standing convention in Apple product naming which dates back to the introduction of the iMac in 1998.

The ‘i’ prefix became a standard for Apple mobile devices, with the iPod, the iPhone and the iPad. Naturally, fans and pundits had been speculating that the ‘iWatch’ would be next.

But Dublin software company Probendi Ltd knew that Apple could not launch an iWatch in Europe, because Probendi registered it as a trademark in 2008.

Probendi Limited is the sole entity lawfully entitled to use the name “iWatch” for products such as “Apple Watch” within the European Union, and will promptly take all appropriate legal actions to oppose any unauthorized use of “iWatch” by whomever for that kind of products.

Probendi’s CEO Daniele Di Salvo told Bloomberg that his company plans to introduce an iWatch product that will run Android 4.4 “and have a square touchscreen, GPS and accelerometer to facilitate health tracking and other apps”.

Mr Di Salvo is currently seeking a manufacturer in China to produce such a device.