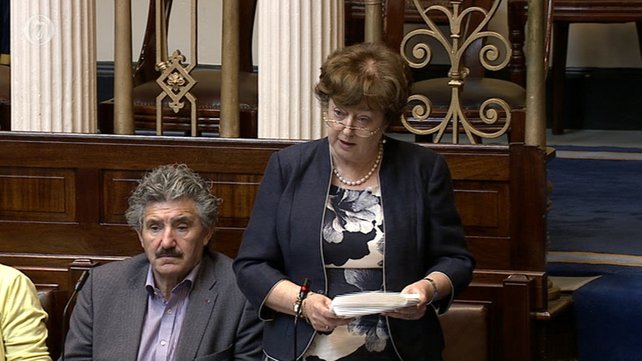 Independent TD Catherine Murphy speaking in the Dáil yesterday. Lawyers for Denis O’Brien are claiming that a High Court injunction prevents media from reporting what she said.

Last week, the High Court granted billionaire businessman Denis O’Brien an injunction against RTÉ, prohibiting it from revealing any details of his relationship with IBRC (formerly Anglo Irish Bank).

Then yesterday, independent TD Catherine Murphy made specific allegations about the banking arrangements between O’Brien and IBRC.

Ms Murphy was speaking in a Dáil debate, and her words are privileged under the Constitution, which states that “utterances made in either House wherever published shall be privileged” (Article 15.12).

Initially it appeared that RTÉ and other media companies were confident of their constitutional right to report Ms Murphy’s remarks. However, stories published online by RTÉ, TheJournal.ie and The Irish Times were later removed or amended, though the original stories can be found in Google’s cache.

Only one site, Broadsheet.ie, has defied legal threats to publish the detail of Ms Murphy’s speech. It has also published correspondence from Denis O’Brien’s lawyers, demanding that it remove the reports:

Scary update: Solicitors acting for Denis O’Brien have asked us to remove this post asserting that it is a breach of a High Court Order [O’Brien Vs RTÉ]. They gave a 7pm deadline or they would begin injunction proceedings. We have replied that article 15.12 of the constitution allows all Dáil statements “wherever published” to be privileged and we currently await their response.

Update: In response, Denis O’Brien’s legal representative said the High Court ruling “covers what could be reported about what was said in the Dáil by Catherine Murphy” and again put us ‘on notice’. Unfortunately The judge in the case never revealed the terms of the injunction. In a statement tonight Catherine Murphy said: “I am a public representative. Information came to me, from a number of reliable sources, that is, without doubt, in the public interest. I have a duty to put that information into the public domain and I fully intend to fulfill my democratic mandate.”

The story has taken wings on social media, with many users alluding to the Streisand effect, whereby attempts to suppress information online leads to greater proliferation, and UK media expert Roy Greenslade has commented in The Guardian:

So there it is. The owner of the bulk of Ireland’s media outlets is using an injunction to prevent reports on his affairs appearing in the rest of the media he doesn’t control.

The hashtag #redacted is trending on Twitter this morning. Fianna Fáil has called for a recall of the Dáil (which has just broken up for an extended break until June 9).

So how far does constitutional privilege of Dáil speech extend? Can the courts prevent the media from reporting the Dáil? Can they prevent the Oireachtas from publishing its own official record? (O’Brien’s lawyers have already written to the Ceann Comhairle to request that the Oireachtas record be amended in relation to a previous speech by Deputy Murphy). Can they stop Deputy Murphy from uploading the video of her Dáil speech to YouTube?

Can they stop me from linking to the Oireachtas transcript, or embedding the YouTube video?