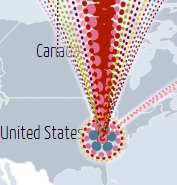 This week, Google are co-hosting a conference in New York titled conflict Conflict in a Connected World.

The summit brings together “hacktivists,” security experts, entrepreneurs, dissidents and others to explore the changing nature of conflict and how online tools and can both harm and protect. We’re also assessing what might be done to better protect people confronting online censorship. With our partners, we will launch several new products and initiatives designed to help

Those initiatives include Project Shield, which offers websites a defence against DDOS attacks, and uProxy a browser extension in development which allows users to provide others with a trusted connection to the web.

They’ve also announced the Digital Attack Map, which uses data from Arbor Networks to provide a live visualisation of DDOS attacks happening around the world.  What it reveals is a little surprising, given that stories of Chinese and Syrian attackers, for example, tend to make the headlines.  At first glance on the current map, China would appear to be “more sinned against than sinning” with several inbound attacks on China from the US and others.  There is a lone attack on the UK which is originating in China.  On closer inspection, however, there is a considerable amount of DDOS activity taking place within China’s borders, which is consistent with China’s policy on internal suppression of free expression.

The US, however, is the prime target of DDOS activity, and like China, some of it is internal.  Can this be attributed to ‘hacktivism’, by different interest groups for political purposes?  Is some of it commercially motivated?  The map also highlights the problem that in the case of most DDOS attacks the source cannot be determined.  According to the International Business Times, botnets controlled by criminals can be hired for as little as £5 an hour.  No doubt some of the inbound attacks on the US could in fact be authored by other governments.