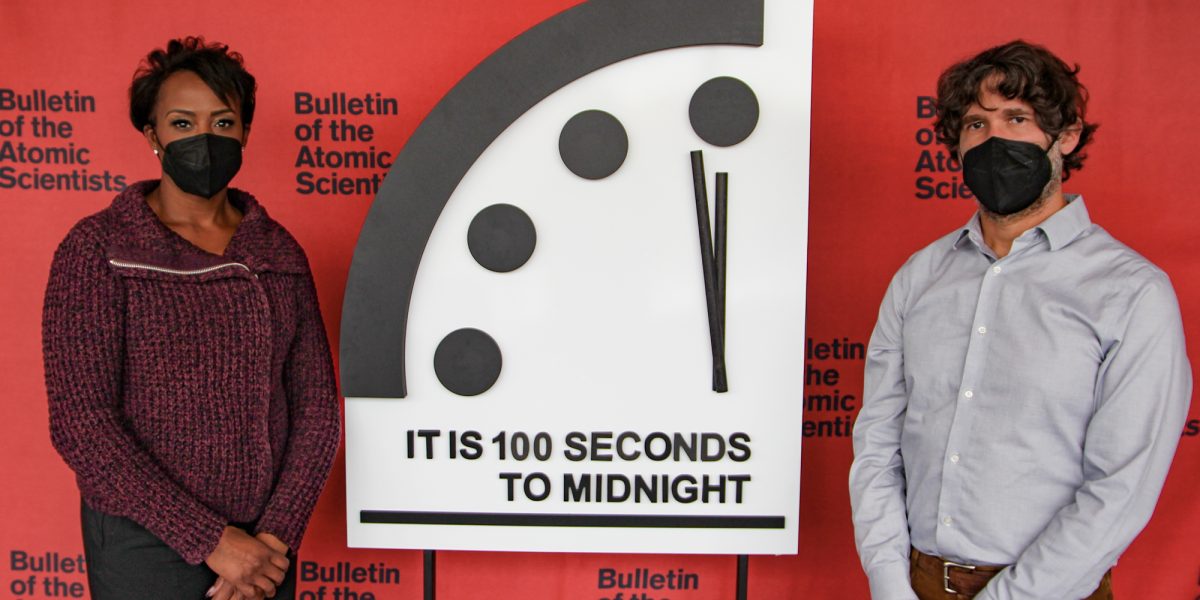 By Jonathan Thomas on January 20, 2022 in Science
0
SHARES
ShareTweet

The Doomsday Clock, located at the University of Chicago, has remained at 100 seconds to midnight for the third year in a row, as scientists said the world is “no safer” than it was this time last year.

The countdown acts as a metaphor for global apocalypse, taking into account the likelihood of emerging threats, such as climate change, and advances in biotechnology and artificial intelligence.

Maintaining last year’s position means the clock’s keepers believe the threat has not cooled off since 2021, with scientists suggesting the environmental perils the planet is facing combined with political issues are a contributing factor to this year’s timing.

Rachel Bronson, president and chief executive of the Bulletin of the Atomic Scientists, said: “This year, in our statement, the Science and Security Board highlights several bright spots and many disturbing trends.

“The board describes a mixed-threat environment, one with positive developments counteracted by accelerating negative ones.”

She added: “Today, the members of the Science and Security Board find the world to be no safer than it was last year at this time, and therefore have decided to set the Doomsday Clock at 100 seconds to midnight.

“The Doomsday Clock continues to hover dangerously, reminding us how much work is needed to ensure a safer and healthier planet. We must continue to push the hands of the clock away from midnight.”

Outlining the reasoning behind again setting the clock at 100 seconds to midnight, scientists said the factors included nuclear risks, which have both declined and risen in the last year, “relatively little action” on climate change, “disruptive technology”, and the ongoing spread of disinformation and tensions over military space activity.

The group also outlined 13 steps to get the world to “back away from the doorstep of doom”.

They include calling on the US and other nations to accelerate their decarbonisation targets and match policies to commitments, urging Russian President Vladimir Putin and US President Joe Biden to identify more ambitious and comprehensive limits on nuclear weapons by the end of 2022, and saying national leaders should work better with the World Health Organisation and other organisations to reduce biological risks “of all kinds”.

“Without swift and focused action, truly catastrophic events – events that could end civilisation as we know it – are more likely,” the scientists said in a statement on the Bulletin’s website.

“When the clock stands at 100 seconds to midnight, we are all threatened. The moment is both perilous and unsustainable, and the time to act is now.”

“Today, the members of the Science and Security Board find the world to be no safer than it was last year at this time and therefore has decided to set the #DoomsdayClock once again at 100 seconds to midnight.” – @RachelBronson1, Bulletin President & CEO https://t.co/oA31lHsPxL pic.twitter.com/RqHVezJ36Q

Sarah Mukherjee, chief executive of the Institute of Environmental Management and Assessment, said: “Today’s announcement from the Bulletin of the Atomic Scientists is an artistic illustration of the state of humanity, but human-induced climate change is very real and the most significant threat to civilisation as we know it.

“Our organisation, IEMA, represents over 18,000 professionals working in environment and sustainability roles, and they have been warning us about a climate disaster for years.

“We need net-zero transition plans for the whole economy, underpinned by green skills to turn back the Doomsday Clock. Cop26 reminded us that we don’t have much time left to make the right changes.”

The countdown was established in 1947 by experts at the Bulletin who were working on the Manhattan Project to design and build the first atomic bomb.

It started at seven minutes to midnight and this year marks the clock’s 75th anniversary.

The Bulletin is an independent non-profit organisation run by some of the world’s most eminent scientists, which was originally intended to warn of the threat of nuclear Armageddon.