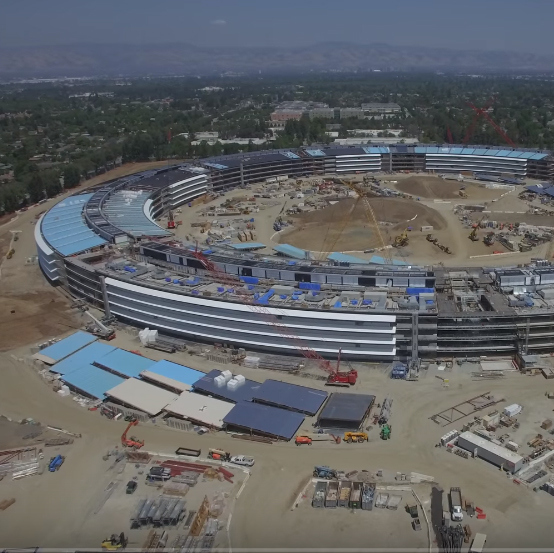 By Conn Ó Muíneacháin on June 8, 2016 in General
0
SHARES
ShareTweet

One of Steve Jobs’ last acts was to finalise the plans for the ‘Apple Spaceship’, as it has come to be known: the company’s new corporate HQ in Cupertino, California. Unlike their pocket-sized products, it’s impossible to keep this particular design under wraps until it’s complete, and thanks to the use of drones, some pretty spectacular footage is emerging of the construction.

The most significant impression is of the sheer scale of the campus. 13,000 people will work in the spaceship-style Main Building, while the adjacent car parking facility has a capacity of 11,000. The project also includes The Theatre, a subterranean auditorium, custom-designed as a permanent home for Apple events and product announcements. It’s circular glass-walled lobby has no columns, offering an unimpeded view of the campus, under an 80-ton freestanding carbon-fibre roof – the largest such structure ever made.

Environmental considerations are very much in evidence, with passive heating and cooling, and solar panels on the garages now 75% complete.

There’s plenty of amazing detail. The video is available in up to 4K resolution, beautifully captured from the air using a DJI Phantom 3 Professional Quadcopter.

Thanks to Blacknight CTO Paul Kelly who spotted this!