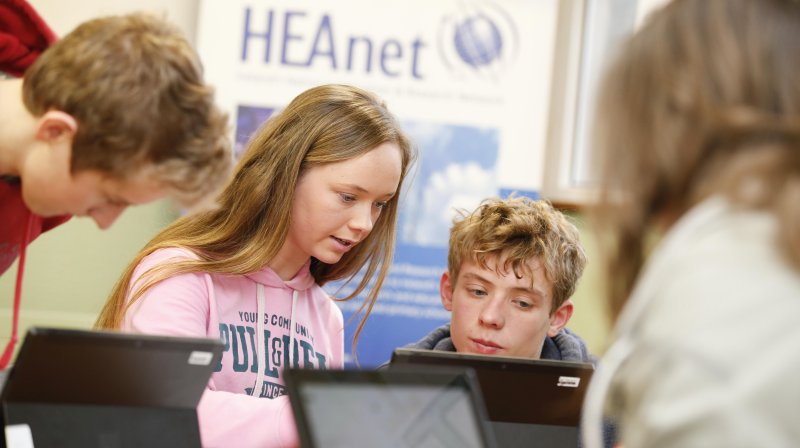 By Conn Ó Muíneacháin on December 4, 2014 in General
0
SHARES
ShareTweet

The Minister for Education and Skills, Jan O’Sullivan TD, and the Minister for Communications Alex White TD, today announced that the roll-out of high-speed (100Mbps) broadband to all post-primary schools has been completed, after the final 269 schools were connected in 2014. This brings to a close the third and final stage of this nationwide programme.

After a pilot project in 78 schools across the country showed that high-speed broadband connection improved teaching and learning, all 202 post-primary schools in 14 western and midlands counties were connected in 2012. The following year, 236 schools in Dublin, Meath and Kildare were connected.

The project has been realised through a collaboration between the Department of Communications, Energy and Natural Resources (DCENR) and the Department of Education and Skills (DES). It was installed, and is being maintained, by HEAnet.

“ICT has a key role to play in transforming teaching and learning, and the installation of high speed broadband in our second-level schools facilitates this.

“The new Digital Strategy for Schools, which I will publish in the near future, will set out how we will work to fully realise the potential of ICT within schools, and will set out a comprehensive list of targets to be delivered.”

“The National Broadband Plan will ensure that every home, school and business in Ireland has access to high-speed broadband. The Government will intervene to provide the infrastructure in areas where the market will not, and there will be a particular emphasis on connecting schools in the intervention area.”

The Department of Communications  funded the capital costs of the project, estimated to be approximately €11m, as well as contributing some €11m in current costs for the years 2012 to 2015. The Department of Education is funding the remaining current costs (estimated to be some €16m up to 2015) and will fund the on-going annual costs into the future.

The Project has been co-funded by the European Regional Development Fund (ERDF). ESB Telecoms provides backhaul from regional locations to Dublin.