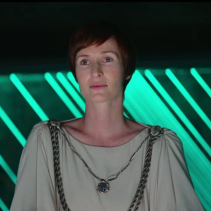 By Conn Ó Muíneacháin on April 8, 2016 in General
1
SHARES
ShareTweet

Rogue One is a new Star Wars film, set just before the events of the original Episode IV film, which introduced us to the Star Wars universe in 1977.

It introduces another new strong female lead (will they produce the toy for this one?) – and appears to deal with the story leading to the theft of the death star plans which Princess Leia gives to R2-D2 in Episode IV.

One of the most interesting things revealed by the trailer is the character Mon Mothma – best remembered for the line, uttered sadly in Return of the Jedi: “Many Bothans died to bring us this information”.

Mothma has appeared elsewhere in the Star Wars universe, and was featured in some deleted scenes in Revenge of the Sith. The original part was played by English actress Caroline Blakiston who is now 83. This new portrayal is uncannily similar.

The general consensus is that that it is Irish actress Genevieve O’Reilly who is playing the role again this time – 11 years after her scene was cut from Revenge of the Sith.