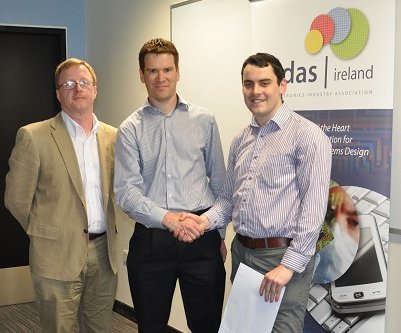 By Conn Ó Muíneacháin on December 2, 2014 in General
1
SHARES
ShareTweet

MIDAS Ireland, the industry led organisation responsible for promoting the microelectronics industry, today announced the launch of their annual engineering competition for third level students aimed at driving innovation and excellence in electronic and microelectronic design and development. The annual competition, organised by MIDAS Ireland is made possible through the support of Analog Devices.

Open to all undergraduate students studying electrical, electronic or microelectronic engineering, entrants are being asked to submit a design and development project with a microelectronics or electronics hardware base. The project may be one which has been undertaken as part of the student’s programme of studies and previously submitted as part of their course. The winning project will receive a €1,000 prize and the opportunity to meet with the judging panel for mentor advice around a career in the sector.

“As an industry led organisation that aims to support the development of the microelectronics industry in Ireland, cultivating the next generation of engineering talent is fundamental to ensuring the on-going sustained success of the sector. Working with our partners in the third level sector we are delighted to run this competition again this year with the support of Analog Devices. In 2015 we’re hoping we will find some new ideas that can be developed further. I’d encourage all students across the country to take part and wish them all the best of luck”

In addition to the competition MIDAS Ireland is planning to host a series of talks across the country over the course of 2015 in third level institutions. The hope is that through direct engagement with industry students learn just how dynamic a career in the microelectronics sector can be. Details of the talks will be posted on the MIDAS Ireland website over the coming weeks.

As well as a brief entry form, students are asked to submit a poster outlining the project title, targeted objectives, work completed and results achieved. The closing date for entries is the 27th March 2015 after which time an adjudication panel will shortlist three projects to compete in a final. The three finalists will then be asked to present their projects in front of an audience of MIDAS members and a judging panel and participate in a Q&A, after which a winner will be announced and the presentation of an award made.

The winner of the 2014 competition was Chris Gallagher from University of Limerick.

For further information about the MIDAS Ireland competition log onto www.midasireland.ie or contact Katherine Barry, MIDAS Co-ordinator on 021-4904375 or info@midasireland.ie.