Exponential progress in chip design has given us a world of incredible processing power, with mobile gadgets that were unimaginable for most people even 10 years ago. Having had our expectations exceeded year after year, it’s perhaps understandable that we might think it will go on forever.

But nothing lasts for ever.

Of course we’ll continue to get improvements in computing hardware, and the shift to the cloud puts more power in our pockets. But the basic formula that IC manufacturers and investors have relied on for almost 50 years, Moore’s Law, has hit the wall.

‘Moore’s Law’ was described by Intel co-founder Gordon Moore in 1965, who had observed that the density of transistors on an integrated circuit was doubling every year or so (later modified to two years).

For a variety of reasons it’s become harder to keep up the pace in recent years. This article in Ars Technica describes some of the challenges involved, perhaps the biggest of which is heat dissipation.

Constrained by heat, clock speeds have largely stood still, and the performance of each individual processor core has increased only incrementally. What we see instead are multiple processor cores within a single chip. This increases the overall theoretical performance of a processor, but it can be difficult to actually exploit this improvement in software.

The issue isn’t about better, faster, more technology for its own sake, of course. Rather it’s about how chip manufacturers sell themselves and their future performance to Wall Street. For years analysts and investors were encouraged to take Moore’s Law at simple face value. Now the manufacturers must change their story and find a new way to promise growth. 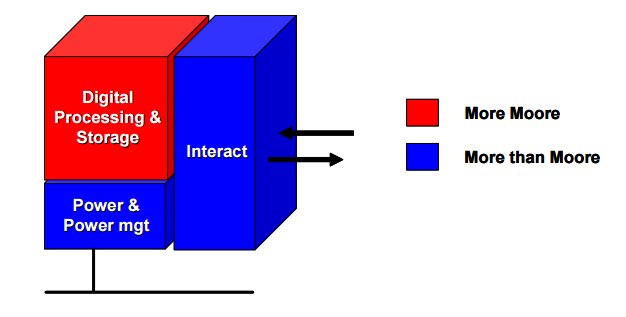 As envisaged by the International Technology Roadmap for Semiconductors, “More-than-Moore” devices complement the digital processing and storage elements of an integrated system in allowing the interaction with the outside world and in powering the system. Source: ITRS White Paper

The new approach has been described as “More-than-Moore”, and focuses on the bigger picture. A white paper by the semiconductor industry road-mapping body, the International Technology Roadmap for Semiconductors, outlines its future strategy of outlining a roadmap for R&D based on interactions with cloud services and the wide range of sensors available for mobile devices, as well as power management (with corresponding implications for heat).

A great article in Nature sets the story out in detail. Hat-tip also to John Naughton.