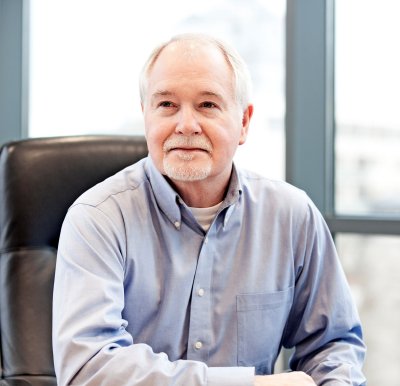 By Conn Ó Muíneacháin on July 23, 2014 in General
0
SHARES
ShareTweet

Professor John Boland, Principal Investigator at AMBER, the Science Foundation Ireland funded materials science centre at Trinity College Dublin has made a world-first breakthrough in area of material mechanics. Professor Boland and his team along with Prof. Sader from University of Melbourne have developed a simple, robust approach to measure one of the most fundamental engineering properties – Poisson’s Ratio – on the nanoscale; a scale invisible to the human eye and 10,000 times smaller than the width of a human hair. Poisson’s Ratio describes the fundamental elasticity of any solid; how a material’s width changes when placed under a mechanical load.  It is a basic principle of engineering that dates back to 1811 and an important guide in the construction of buildings, skyscrapers and bridges. It allows engineers and builders to identify how much a material can be compressed and stretched and how much pressure it will withstand, before it collapses. Poisson’s Ratio has never before been measured on the nanoscale. This discovery by Professor Boland, who is also Research Professor in Trinity’s School of Chemistry, will have a huge impact on the development of flexible electronics, wearable technology and implantable devices. It now means that ICT and electronics manufacturers and designers can gauge the elasticity of micro wires and metals and can test their suitability for use in flexible electronics such as smartphones, watches and tablets. Commenting, Professor Boland said:

“More than 200 years after Poisson’s Ratio was first introduced, we are delighted to have made this breakthrough on the nanoscale. The Poisson’s Ratio is crucial to construction and engineering, ensuring that all load-bearing structures such as buildings and bridges are made of the correct materials and ultimately are safe and sturdy. It has been a hugely effective guide for large scale structures, but it has until now, been unavailable to assist in the design of nanoscale structures that are so important for today’s technologies.  By translating this basic mechanical concept to the nanoscale, essentially measuring the elasticity of materials that are just a few hundred atoms across, it will open up huge opportunities for electronics and ICT. As we move to an age of wearable technology, it is crucial that scientists understand how materials respond at their very basic level.”

The discovery has been published in the prestigious scientific publication Nature.