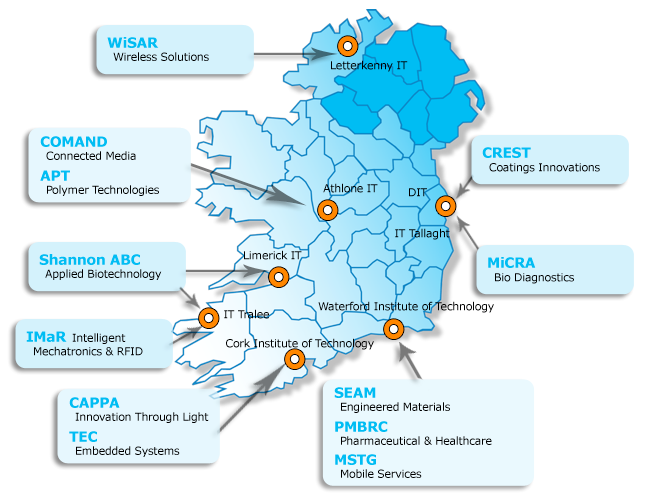 By Conn Ó Muíneacháin on October 21, 2013 in General
19
SHARES
ShareTweet

Minister for Research and Innovation, Seán Sherlock TD, is in Thomond Park Limerick this morning, to officially launch the Technology Gateways programme.  It’s a scheme designed to support Irish companies using research and development expertise provided within the Institutes of Technology.  The map shows the distribution of the 12 Gateways, located in 8 ITs, and the idea appears to be that in addition to providing particular expertise in each Gateway, that the Gateways would also act as a network, providing a local point of presence for the network as a whole.

According to Declan Lyons of Enterprise Ireland: “Enterprise Ireland and the teams in the Technology Gateways are committed to solving the technical challenges faced by companies in their efforts to develop new products and services. The beauty of this network is that if one Gateway doesn’t have the answer, they can put out a call to the other 11 in the network to find it.”

So is this merely a rebranding of existing research facilities?  There appears to be some restructuring and investment involved.  One of the 12 Gateways is IMaR in Tralee, which will receive up to €1.2m in funding under this scheme over 5 years.  IMaR has been formed from the “amalgamation of two applied research centres located at IT Tralee”, which between them have a track record of “70 funded research projects with collaborating industries”.

Of course, the proof is in the pudding.  There are some great testimonials to IT research centres from Irish entrepreneurs in a video over at www.technologygateway.ie (not embeddable).  Hopefully, this initiative will lead to many more stories.