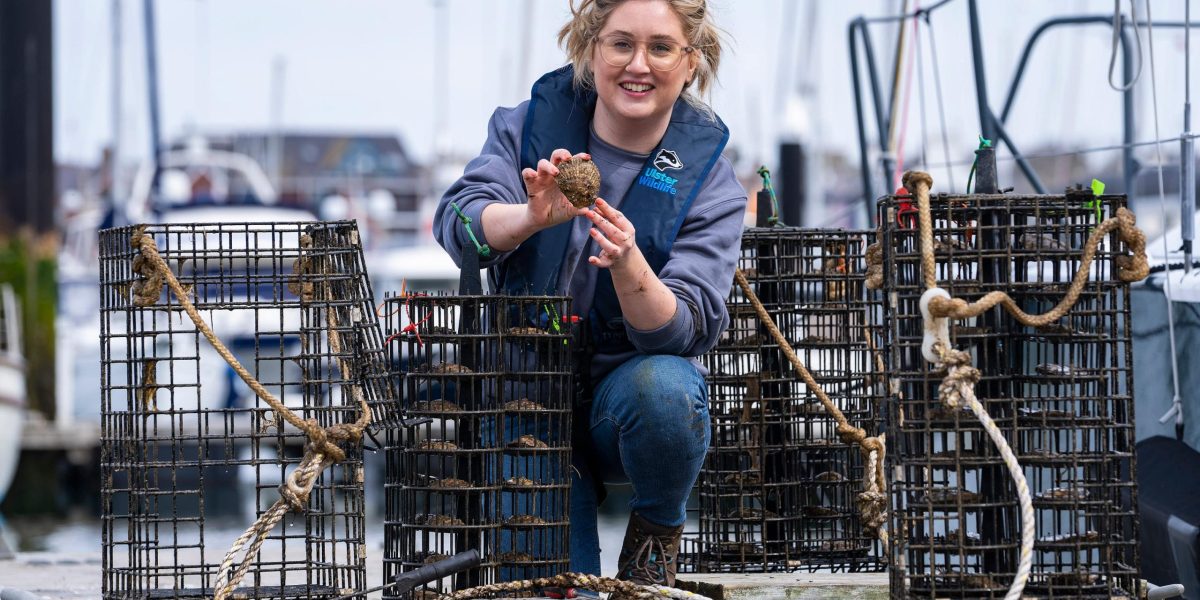 By Jonathan Thomas on May 23, 2022 in Food, Science
0
SHARES
ShareTweet

A restoration project is aiming to help oysters flourish in Belfast Lough once again.

Native oysters appeared to have become extinct in the lough in 1903, only to be discovered again in 2020 at six sites.

Now a native oyster nursery at Bangor Marina, the first of its kind on the island of Ireland, aims to boost numbers to help the species flourish once more.

The nursery will produce millions of larvae to help the native oyster population to recover.

The ambitious restoration project, officially launched on Friday by Ulster Wildlife to mark Endangered Species Day, sees approximately 700 mature oysters suspended in cages under the pontoons of the marina.

As sea temperatures warm over the coming months, the 24 nursery cages will generate millions of oyster larvae which will settle on the seabed, helping the native oyster population recover while also boosting biodiversity and improving water quality in Belfast Lough.

Since then, surveys failed to document one living specimen, until 2020 when researchers from Bangor University and Queen’s University Belfast discovered 42 live oysters at six sites around the lough.

“We are still unsure how or why native oysters returned to Belfast Lough, but it indicates that the environmental conditions are right for them to establish here again.

“But, if they are to bounce back, they need our help,” she said.

“The biggest barrier to the recovery of the native oyster is a low number of mature reproducing oysters.

“The nurseries we have established at Bangor Marina are full of mature oysters that will act as larval pumps, increasing the number of oysters in the Lough and helping to restore this incredible ocean superhero for years to come.”

“A single oyster can filter up to 200 litres of seawater, equivalent to a bathtub, per day, significantly improving water quality and reducing pollution levels,” she said.

“The larvae once established will also create healthy native oyster reefs in the lough, providing shelter and food for an abundance of marine wildlife, including commercially fished species, along with potential carbon storage.”

Special permissions were granted to relocate the shellfish from Loch Ryan in Scotland, which were screened for disease and cleaned on arrival before being installed in the nurseries.

Volunteers will conduct health checks every week to ensure the oysters are thriving in their new homes.

Monthly biodiversity surveys will also track changes in marine life in and around the nurseries, which form their own unique micro-habitat.

Kevin Baird, harbour master at Bangor Marina, said his team are delighted to be supporting the recovery of our most threatened marine species.

“Housing the oyster nurseries under the pontoons is an innovative use of the space we have available and is a great opportunity for the marina to become an outdoor classroom, where people of all ages can get hands-on with marine conservation in an urban environment,” he said.

The oyster restoration project is funded by the Daera Challenge Fund.

Twitter users told to be wary of scam messages about verified accounts
‘Things like us may be extremely rare’, Prof Brian Cox says