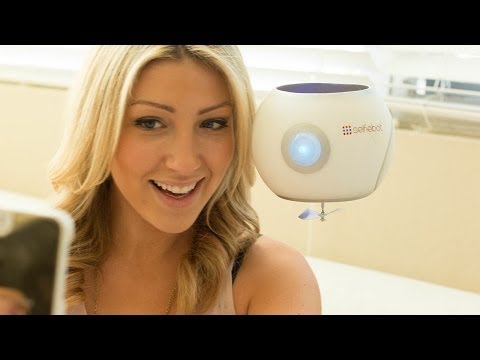 “Have you ever found yourself trying to get the perfect selfie, but couldn’t quite reach your arms far enough?”

No? I thought not!

Narcissism is a powerful driver, it’s true, but I hope it never comes to the stage where a product like Selfiebot could actually exist in reality.  Still, as a piece of perfectly pitched gentle satire, this video from Gosphero is very funny (and a clever promotion for their real products).

Lot’s of companies appear to have latched on to selfies as a theme for their April Fool Spoofs this year.  Google are using it as an excuse to promote Gmail Themes, suggesting that you can share your selfie themes with your friends:

“As the pioneering platform for selfies, Gmail is committed to being at the forefront of innovation in the selfie space. And we think it’s a tragedy that your handsome hair, luscious lashes and beautiful brows have been trapped in your own inbox. Until now, that is. Today, we’re proud to free your selfies by launching Gmail Shelfie, the SHareable sELFIE.”

In the process, Gmail is claiming to be the origin of the term ‘selfie’, and they predict that ‘shelfie’ will be the 2014 Word of the Year.

With ‘wearable’ being another major  trend, both Samsung and HTC put out surprisingly similar hoaxes: Samsung Fingers and HTC Gluuv.

Lifehacker has a pretty good roundup of some of the more amusing international tech pranks.

Here in Ireland, a number of Irish organisations involved in advocacy against discrimination and under-privilege, took the day of silliness as an opportunity to highlight some serious issues under the hashtag: #NotanAprilfool:

1 in 5 women have been abused by a partner. 52% of women avoid certain areas for fear of violence http://t.co/loWjGf5Lbg #NotAnAprilFool

27 people were given electro-convulsive therapy against their consent in 2012. #NotAnAprilFool http://t.co/EIuXKnbBzu

Ireland’s Overall % tax take is the third lowest in the EU after Malta and Bulgaria http://t.co/IDsdSY0WNL #NotAnAprilFool

There’s more under the hashtag #NotanAprilfool.  It’s not a unique tag, and it is a little swamped by tweets unrelated to the campaign, but it has got a lot of attention from influential tweeters in Ireland and has been trending.