By Conn Ó Muíneacháin on January 10, 2012 in General
0
SHARES
ShareTweet 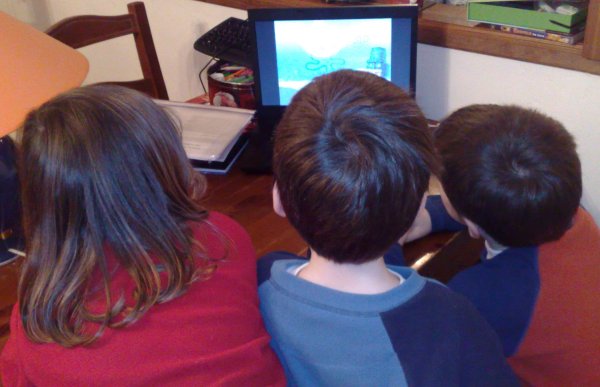 When I blogged about my plans to “cut the cord” the other day, I didn’t know that Netflix was coming to Ireland and the UK.

First of all, hats off to them for a simple sign up.  This photograph was taken 2 minutes after I visited Netflix.com.  Three little Spongebob Squarepants fans are clearly impressed.

Of course, what makes it quick is the fact that I didn’t have to choose a username or password, or wait for a verifcation email.  That’s because Netflix logs you in with your Facebook ID.

Which could also be a problem …

There’s plenty of esoteric content to be discovered, “cerebral” drama and Bollywood, but browsing the catalog it becomes clear very quickly that you won’t find the latest HBO hits on Netflix.

Still, it’s amazing value.  Not knowing what to expect, I assumed that the €6.99 monthly membership was in addition to “per film” charges.  It is not.  €6.99 is amazing value, and it really throws down the gauntlet to DVD rental shops, cable and satellite providers.

That’s the power of the internet of course, disrupting things as usual, except that this innovation may actually disrupt the internet itself.  In America Netflix has grown gradually, beginning with a postal DVD service 14 years ago, reaching the point where Netflix streaming accounts for a third of all internet traffic, and putting it at the forefront of the debate about Net Neutrality.

That debate is going to come into sharp focus in Ireland and the UK in the coming months, as Internet Service Providers discover the meaning of unlimited streaming.