By Michele Neylon on October 9, 2012 in security
43
SHARES
ShareTweet

So who is at fault here?

Whois has reverted back to Google’s though it’ll probably take a while for people to see the change due to caching with their ISP’s resolvers etc.,

Just to clarify. The DNS was not “hacked”. The DNS servers were changed away from Google to somewhere else. This is a “hijack” not a DNS hack

BUT, the change was not authorised by Google, so someone either hacked into or social engineered their way into either IEDR or Mark Monitor in order to get the change made.

Seemingly yahoo.ie was also hijacked today and the nameservers changed to the farahatz.net ones. These changes *appear* to have been reverted before too many people noticed.

At this stage I am not aware of any official statements from either Google (they’re declining to comment), IEDR (they probably won’t say much today, if ever) or MarkMonitor.

While Google.ie obviously gets a very large amount of web traffic it isn’t actively used for email. Yahoo.ie on the other hand would be used by a lot of Irish Yahoo! email users, so email service for them would have been disrupted.

Most Irish users are now able to access google.ie as normal, however at least some are still reporting issues:

@blacknight Google.ie still down..com & .co.uk can be accessed thankfully.Yahoo.ie seem to have sorted their problem

Does anyone know why google.ie isn’t working?

This may be down to their ISP’s DNS servers holding stale records from earlier this afternoon or it could be that their office or home router has cached the records.

Google has issued an apology for the disruption to Irish users which has been reported by several media sources.

Here’s the full statement from the IEDR (courtesy of The Sociable):

Tuesday, 9th October, 2012: The IEDR confirms that earlier this afternoon an unauthorised change was made to two .ie domains on an independent Registrar’s account which resulted in a change of DNS nameservers.  The consequence of the change is that visitors to the two websites would be redirected to an allegedly fraudulent address. The IEDR worked with the Registrar to ensure that the nameserver records have been corrected.

It’s not particularly long, but it would seem to suggest that IEDR are blaming Mark Monitor. Wouldn’t it have been more prudent to work with the registrar before sending out something like this?

San Francisco-based MarkMonitor, the registrar responsible for both addresses, blamed lax security at the Irish registry level for the incident.

Surely this kind of “blame game” is counter-productive?

The IEDR suffered a massive outage last month with their public-facing websites, whois and other services unavailable for about 36 hours.

UPDATE 2310 IEDR have taken all their websites and whois offline. In an email to registrars IEDR state that they have been in contact with the Gardai (Irish police).

UPDATE 0745 IEDR have published a statement on their website explaining (briefly) why their websites and other services are offline:

IEDR systems are currently unavailable. We apologise for the inconvenience to our customers.

As you may be aware, there was a security incident on Tuesday 9th October, involving two high profile .ie domains.

There was an unauthorised access to one Registrar’s account which resulted in the change to the DNS nameserver records for the two .ie domains.
The IEDR worked with the Registrar to ensure that the nameserver records were reset and corrected promptly.
Simultaneously, IEDR commenced an investigation and analysis, with the assistance of external security experts.

Based on the results of the investigation and the recommendation of security experts,
IEDR are bringing its external web-based systems off-line, commencing at 22:00 hours, in order to perform additional analysis.

Gardai have been notified and IEDR has requested that the Garda Bureau of Fraud Investigation conduct an investigation into this external attack on the .ie namespace.

And here’s a screenshot of their main site as of 8am this morning:

Their WHOIS service is currently available so people will be able to access information related to currently registered .ie domain names.

While many Irish internet users yesterday were unable to reach google.ie some apparently were sent to a site on an Indonesian IP.

Here’s a screenshot of what they saw: 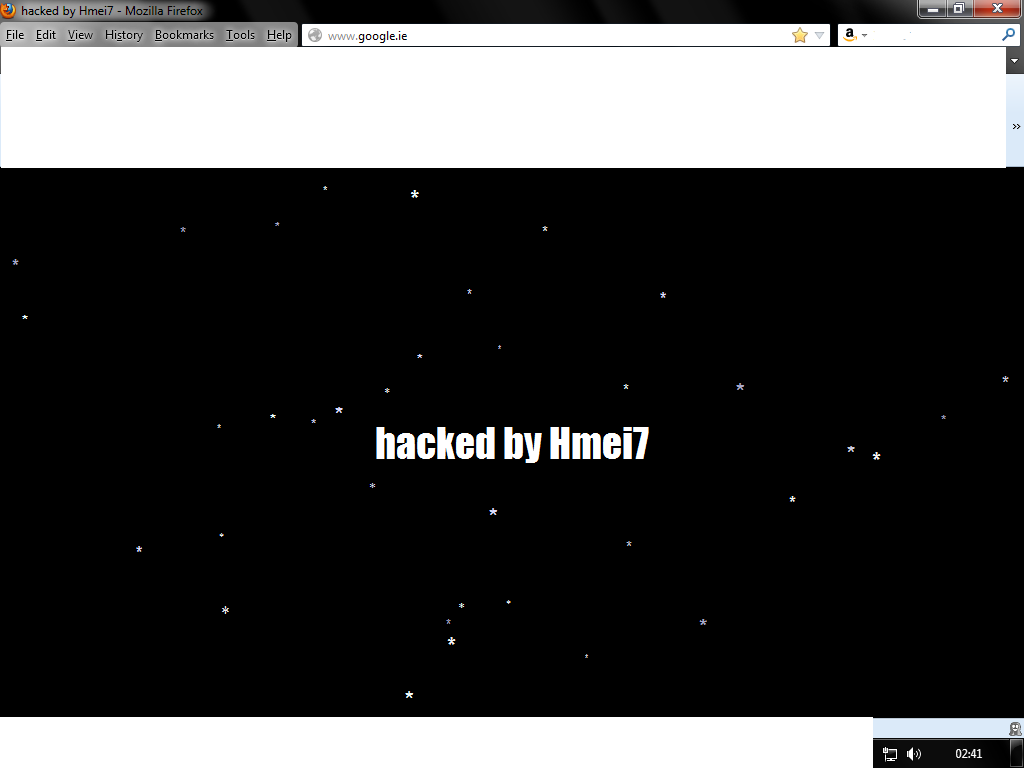 The “defacement” or “hack” page is signed by a “Hmei7” who is apparently an Indonesian hacker whose “signature” has appeared on thousands of websites defacements including attacks against Asus and Siemens.