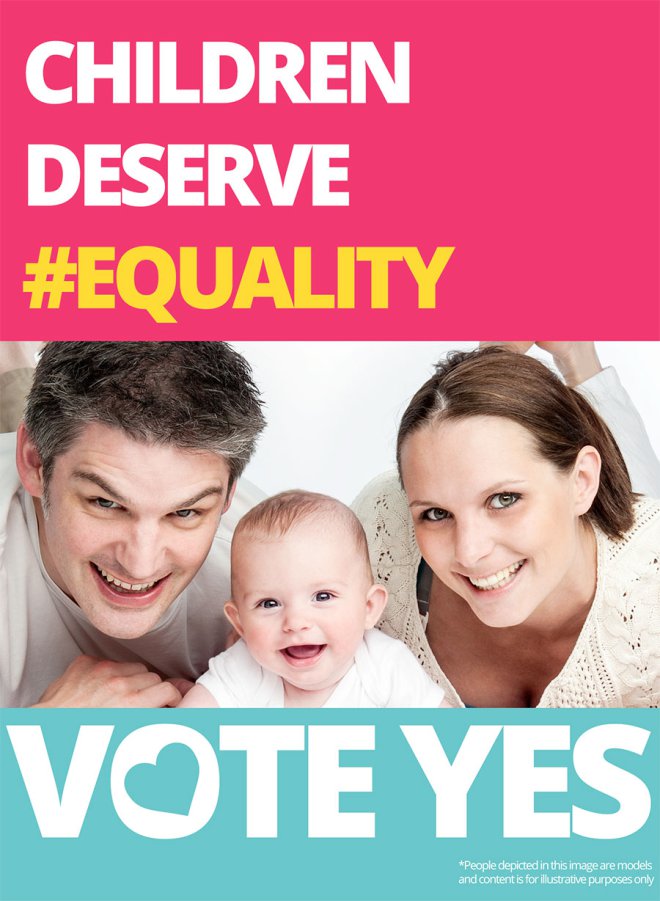 By Conn Ó Muíneacháin on May 7, 2015 in General
0
SHARES
ShareTweet

The family featured in the stock photo image used by the No campaign in the Marriage Referendum have issued a statement through Amnesty Ireland, saying that they “completely support same-sex marriage” and that to suggest otherwise is offensive to them.

And the alternative version of the poster created by Blacknight’s graphic designer James Larkin has been used by Amnesty to express the family’s true feelings.

@amnestyireland @Colmogorman That ‘improved’ poster was created by our designer @forbairt. We’re delighted to see you use it #YesEquality 🙂

In their statement, the family, who live in the UK, explained that they were not paid for the rights to licence their images via a stock photography company, but that they had agreed to allow the photographer to do so, as he had done the pictures for free.

Speaking to Technology.ie, James Larkin explained that he was delighted to discover that his alternative poster was in line with the family’s personal views.

“I’ve been following the marriage equality debate and was kind of shocked that generic stock images would get used to promote something like the no campaign. I did a bit of checking and came across that image and decided to make an alternate version. I wasn’t 100% sure of their support of the Yes campaign but it’s great to read their response on The amnesty.ie Website.

As a married dad of two. I love my children unconditionally, and no matter what I want them to have equal rights like everyone else.”

The full statement released through Amnesty is included below:

The background: in 2014, as a young family, we did a photo shoot with a photographer friend to get some nice shots for the family album. No money was exchanged – we got nice photos for free, they got nice images for their portfolio. As part of this agreement, we agreed to let them upload them to a stock photo album. We knew that these were available for purchase and we gave permission. Perhaps, naïvely, we imagined that on the off chance that any was ever selected, it might be for a small magazine or website.

To confirm, we have not received any money for the photo – then or now, and nor do we expect any.

We were surprised and upset to see that the photo was being used as part of a campaign with which we do not agree. We completely support same-sex marriage, and we believe that same-sex couples’ should of course be able to adopt, as we believe that they are equally able to provide children with much-needed love and care. To suggest otherwise is offensive to us, and to many others.

No one can convince us that life-long unions of so many loving same-sex couples here in the UK and in Ireland, are inferior to heterosexual unions, and it is important to us that our many gay friends know that we feel this way. Discrimination on the grounds of sexuality has no place in the 21st century. If we were residents of Ireland, not the UK, we would vote Yes for marriage equality.

In a free society, everyone has the right to express their opinion and campaign for what they feel is right.

We are not lawyers and therefore cannot comment on whether the use of the photo violates any terms and conditions regarding use of stock photos of children for political use, though we are interested to know more about this.

We are unhappy that the image of us was used for a political campaign as legally this seems a bit of a grey area, and we would have expected that for a big campaign like this, Mothers & Fathers Matter might have sought out images of people who represent their views. We are aware of the offer from Mothers & Fathers Matter for dialogue and are deciding whether to pursue this.

We look forward to raising our son (in the picture) and our second child (due in June) to be open-minded and unafraid of change, and to respect all colours, creeds and sexualities etc. Above all we hope that children in Ireland, will be guaranteed the equality that our children enjoy, and will be able to grow up in a society which guarantees them full equality before the law, no matter who they love when they eventually go on to form adult, loving, committed relationships.

Amnesty Ireland says that its support for the Yes campaign is in line with its imperative on human rights, including the right to marry and found a family, as provided in Article 2 of the Universal Declaration of Human Rights and Article 2 of the International Covenant on Civil and Political Rights (ICCPR).

Amnesty International adopted a global policy in 2007 calling for an end to discrimination in civil marriage laws on the basis of sexual orientation or gender identity. Its membership in Ireland decided by a vote at its Annual Conference in 2009 to endorse and support a campaign for civil marriage equality here in Ireland.

Technology.ie is brought to you by Blacknight, Ireland’s premier provider of web hosting and domain names. Blacknight supports Marriage Equality.