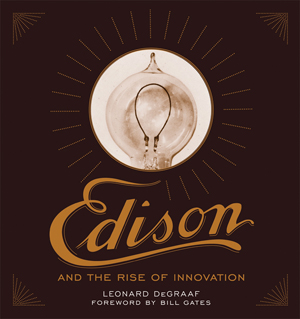 By Conn Ó Muíneacháin on October 11, 2013 in General
1
SHARES
ShareTweet

Bill Gates blogs the foreword he has written to a new book on Thomas Edison.  He argues that Edison’s legacy is not his inventions, but his contribution to the processes of innovation and entrepreneurship.  He sets out the ways in which Edison industrialised invention: building on the work of others; “inventing things that people wanted”; organising the process of trial and error.  The truth of technological progress is less glamorous than the notion of the “light bulb moment” of inspiration.

According to Gates, Edison teaches that innovation has less to do with coffee and beanbags and blue sky thinking, and more to do with teamwork, process and good business sense.

These lessons are just as true today as they were in Edison’s time. Innovators still have to work in teams. (Although that’s far easier to do today than at the turn of the twentieth century. Imagine what the Wizard of New Jersey’s Menlo Park could have done with the tools coming out of California’s Menlo Park.) Innovators still have to understand and solve real-world problems, and they still have to persevere for the long haul. Scientists run trial after trial to perfect a new vaccine. Co-workers at software companies debug each other’s code.

So is it less Xerox PARC and more Menlo Park?  We’ve discussed this before on Technology.ie in relation to the different styles of Edison and his contemporary, Nikola Tesla.  And can the modern day Microsoft be compared to Menlo Park Lab, or could it learn something from Edison’s market focus?