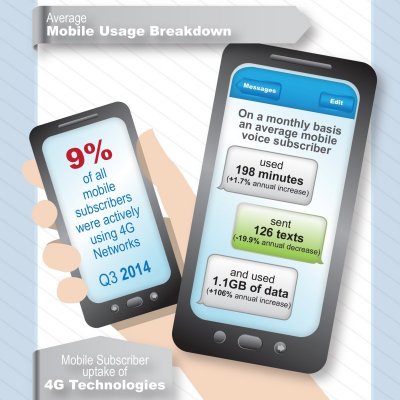 By Conn Ó Muíneacháin on December 12, 2014 in General
1
SHARES
ShareTweet

The volume of data on mobile networks in Ireland has increased by over 75% in the past year, while texting (SMS) has decreased by almost 20% in the same period according to the latest Quarterly Report by the Commission for Communications Regulation (ComReg).

The Quarterly Report on the Electronic Communications market for the period (1 July to 30 September) Q3 2014 is available to download from the ComReg website. See below for an infographic.

In Q3 2014 mobile Average Revenue Per User (ARPU) was €25.4 per month, up from €24.9 per month in the previous quarter, but still slightly below the ARPU of €25.8 per month in the period Q3 2012. This overall decline over this period is in line with a general downward trend in ARPU across Western European countries.

There were 5,759,563 mobile phone subscriptions at the end of September which was an increase of 0.2% on the previous quarter. Ireland’s mobile penetration rate for the quarter was 124.9%.