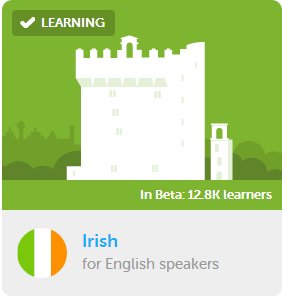 Duolingo, the crowdsourced language-learning company, has beta-launched one of its most eagerly anticipated courses: Irish.

It may come as a surprise to some, but when Duolingo asked its community what language courses they should develop next (after Portuguese, Spanish, English, Italian, German and French), the top requests were for Irish, Danish and Dutch.

On St Patrick’s Day, the company announced that Irish had been selected for development, and put out a call for volunteer contributors to help develop the course. The beta was finally revealed this week, to an enthusiastic response from the community.

Duolingo attracted 25 million users in under two years. Its largest market is the US (where there is a significant online community of people interested in Irish culture and heritage), followed by Brazil. All Duolingo courses are free, and the company generates revenue by providing paid translation services using the crowdsourced work of its community of language learners.

The opening of the public beta for Irish has generated a lot of activity on the course and its related forum. In addition to the usual minor bugs, some users have expressed concern about the quality of the pronunciation in the samples of the recorded audio used in the course. It has not been confirmed if the audio was recorded by a volunteer or professionally produced.

Duolingo says the beta testing is likely to take “another month or so”. Until then the course is only available on the web. Once the beta is complete, the Irish course will be launched on the Duolingo mobile apps, which are used by 87% of its users.

See you at Growth Hackers in Dublin this Evening
How we Grew DoneDeal, by Fred Karlsson [Video]