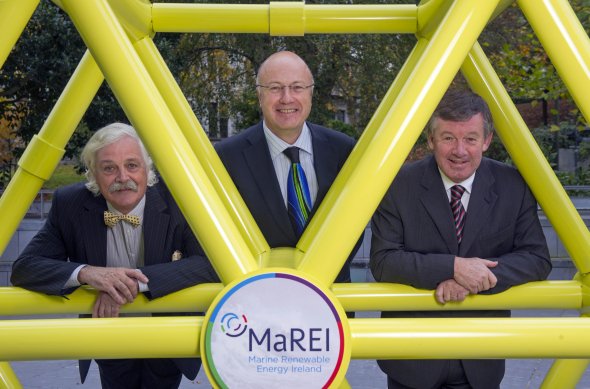 By Conn Ó Muíneacháin on November 21, 2013 in General
0
SHARES
ShareTweet

A new research centre, with the potential to position Ireland at the forefront of the Marine Renewable Energy Industry has been officially launched by the Minister for Research and Innovation Seán Sherlock, T.D.

MaREI, Marine Renewable Energy Ireland, is based at University College Cork (UCC) and will receive funding of €19million from the Department of Jobs, Enterprise and Innovation through Science Foundation Ireland (SFI) with a further €10.5 million from 45 industry partners including Bord Gas Energy, ESB Energy International, Intel, Siemens, DePuy, many other global market leaders and indigenous SMEs in the area of energy, marine technology, software and hardware.  Academic partners include lead partner UCC along with University College Dublin, Cork IT, University of Limerick, NUI Galway, NUI Maynooth, Marine Institute and Teagasc.

The centre will directly support 77 jobs and hopes to support the creation of significant employment in the long-term through spin-out companies and intellectual property in the field of marine renewable technology and marine energy materials, devices and solutions for industry.

Speaking at the launch of MaREI, Minister for Research and Innovation Sean Sherlock, T.D. recognised the commitment shown by Government, industry and academic partners, stating:

“By making Ireland an international focal point for the marine renewable industry, MaREI will help create solutions for the marine energy industry to meet national and international sustainable energy demands, and ensure that jobs created in this sector benefit the national economy. MaREI will prepare ocean technologies for market by removing technical and commercial barriers, and will directly create companies and jobs, thereby serving as a catalyst for Ireland to establish a safe, sustainable and profitable energy supply for domestic use and for export.”

“MaREI is one of seven world-class SFI Research Centres of scale and excellence that involve significant co-investment by industry partners.  This investment reflects the excellence of the research and strategic relevance of the sectors to industry and Ireland.”

TEDx CorkWomen is Launched
How To Maximize Battery Life [Infographic]