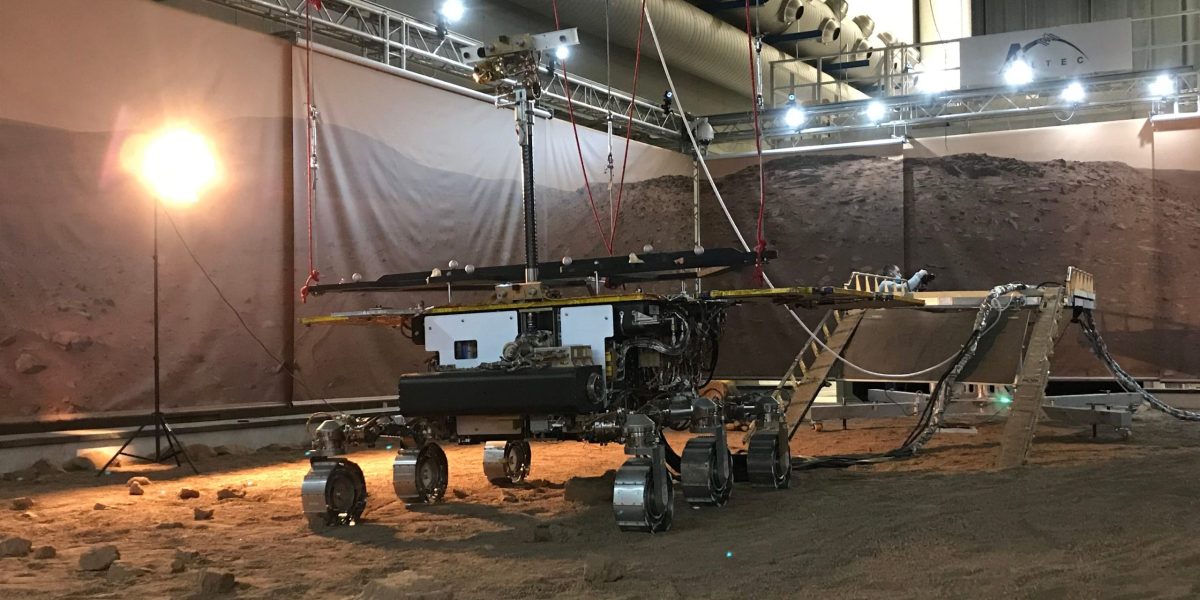 By Jonathan Thomas on January 18, 2022 in Space
0
SHARES
ShareTweet

The ExoMars rover is one step closer to landing on the red planet following a rehearsal of what happens after it touches down.

The exercise involved simulating the UK-built Rosalind Franklin rover driving off its landing platform once it touches down on Mars.

After the nerve-wracking descent to the surface of the planet, the rover will leave the landing platform in a carefully choreographed move and drive onto Martian soil for the first time.

All of its instruments are ready for flight, with some minor tuning left to complete this month, the European Space Agency (ESA) said.

Pietro Baglioni, ESA’s ExoMars rover team leader, said: “The rover is ready, and together with the recent drop test success for the parachutes, we are positive to be in time for the September launch date.”

The date represents a period that only occurs once every two years, for about 10 days, when the positions of both planets would allow the spacecraft to reach Mars from Earth in the shortest possible time – around nine months.

Currently, the rover is in an ultra-clean room at the Thales Alenia Space premises in Turin, Italy, next to its travelling companion, the Kazachok landing platform.

After a final review in April, all the components of the spacecraft – rover, descent module, landing platform and carrier – will move to the launch site in Baikonur, Kazakhstan, to prepare for lift-off.

Just before that trip, the final version of the software that will allow the rover to scout Mars autonomously will be uploaded.

ESA said Rosalind’s twin – so far known as the Ground Test Model, but now called Amalia – successfully left the platform during recent tests in a Mars terrain simulator at the Altec premises in Turin.

Despite the driving during these exercises only taking about 15 minutes, the whole process will last a few Martian days.

After landing, it will take the rover more than a week to unfold its wheels and deploy the mast, among other things.

Andrea Merlo, ExoMars head of robotics from Thales Alenia Space, said: “The egress is a long and crucial operation.

“We need to be gentle and run it in a very slow motion for extra safety.”

The landing platform has two exit ramps – one at the front and another one at the back.

While the rover is designed to negotiate steep inclines on the ramps, it is up to ground control on Earth to decide which is the safest way to drive off.

Amalia is being used by engineers to recreate different scenarios and help them decide what will keep Rosalind safe on Mars.

It has so far demonstrated drilling soil samples down to 1.7 metres and operating all the instruments while sending scientific data to the Rover Operations Control Centre (ROCC) – the operational hub that will orchestrate the roaming of the European-built rover on Mars.

Sue Horne, head of space exploration at the UK Space Agency, said: “The Rosalind Franklin rover showcases some of the best of the UK’s space sector, and its search for signs of life on Mars will inspire future generations of scientists and engineers.”

The rover was built in Stevenage by Airbus, while the UCL Mullard Space Science Laboratory led on an instrument known as the PanCam, a high-resolution 3D camera which will look at the terrain and rocks to try to detect signs of life.

The University of Leicester, Teledyne e2v and STFC RAL Space worked on the Raman Spectrometer, which will use laser light to identify particular minerals and organic compounds and search for life.

The ExoMars programme is a joint programme between ESA and Russian state space corporation Roscosmos.