By Conn Ó Muíneacháin on April 11, 2016 in General
0
SHARES
ShareTweet

Colin Gill with his G Tune, automatic guitar tuner one of the winners at the final of the Intel 3rd level Galileo competition where students design Internet of things applications with the Intel Galileo board. Pic: Marc O’Sullivan

On Friday April 8th the final of the Intel Galileo 3rd Level Technology Competition took place at the Science Gallery in Dublin. The competition, which has been running since the beginning of January, is open to all 3rd level undergraduate students on the island of Ireland.

The competition invites students to create projects based on the Irish designed Intel Galileo board. The Intel® Galileo board is the first in a family of Arduino*- certified development and prototyping boards based on Intel architecture and specifically designed for makers, students, educators, and DIY electronics enthusiasts.

The collaboration with Arduino sought to inspire creativity, learning and invention with Makers and Students and development kits and software programming interface that make it easier for artists, designers and other do-it-yourself enthusiasts – who often don’t have technical backgrounds – to create interactive objects or environments.

To further spur innovation across the entire computing spectrum, Intel went on to provide 50,000 Galileo boards to universities worldwide and since 2014 almost 1000 boards have been provided to 21 different institutions across Ireland who have been integrating them into curriculum plans and using the boards for a variety of research projects.

This was the second year of the Intel Galileo Technology competition which was created to give students the opportunity to showcase the projects that they have been creating with the Galileo boards.

Following the first round of the competition, which involved students submitting their project ideas and a short video summary online, a shortlist of finalist projects was selected. The 8 finalist projects came together on April 8th for a special showcase judged by representatives from Intel’s Internet of Things group.

The 8 finalist Projects were: 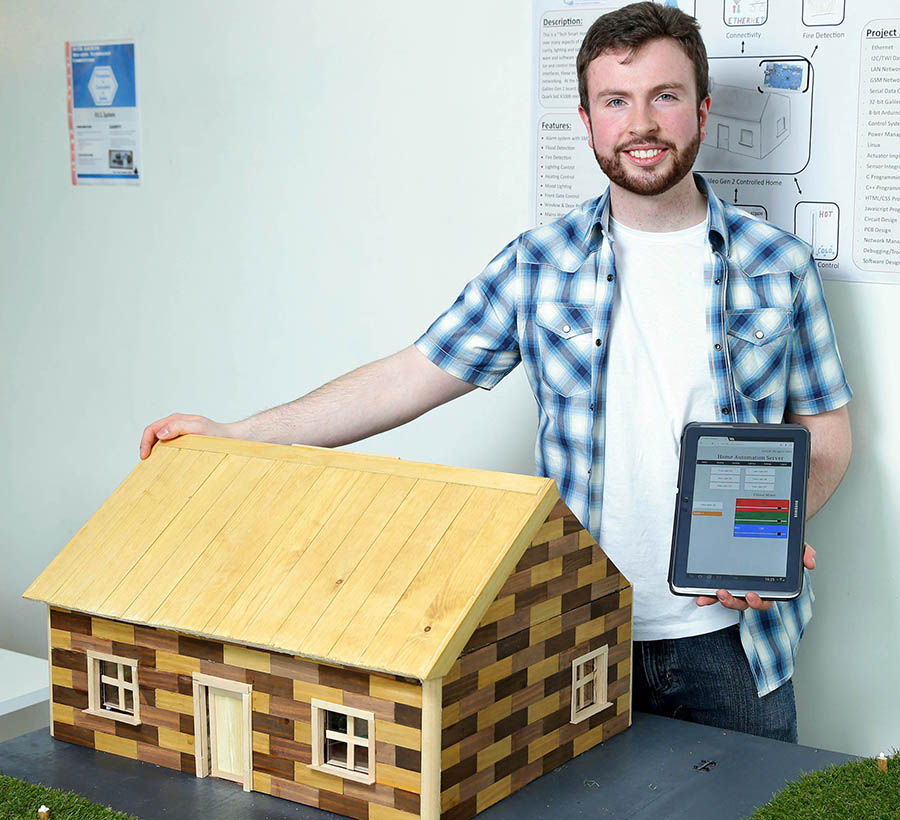 David Walshe from GMIT with his project Tech Smart Home, one of the winners at the final of the Intel 3rd level Galileo competition. A total of 8 projects made it through to the final where students design Internet of things applications with the Intel Galileo board. Pic: Marc O’Sullivan

The 8 finalist projects, who were vying for a top prize of €1000, were judged by representatives from Intel who selected two projects as overall winners such was the high standard of the competition. The winning projects, both from Galway-Mayo Institute of Technology (GMIT), were Tech Smart Home by David Walshe and G-Tune by Collin Gill.

The overall prize was presented by Denis Dempsey, Director of Operations for IoT at Intel, who said “What I saw here today was a fascinating mix of the potential of smart connected intelligent devices being applied to precision agriculture, musical note analysis and smart home appliances. The Galileo competition has one again demonstrated the high standard of innovation and creativity amongst Irish students”.

To find out more about the Intel technologies for the maker community visit www.intel.com/maker.