Back in December we wrote about how Upworthy, the good news, fluffy, heartwarming, annoying, viral video meme site was dominating interactions (likes and shares) on Facebook.

So have you seen as many Upworthy videos lately?  Me neither.

It’s possible that Facebook users just got sick of all the sweetness, but if so, they had a little help from Facebook itself, which announced in December that it was changing its news feed algorithm to provide more “high quality content” such as news, and less memes.  They said their research showed that was what users preferred:

So if you think you’re seeing less memes on Facebook – here’s how it looks at the meme factory:

That’s a graphic from Quantcast data, as interpreted by Business Insider, who draw a clear correlation between the decline in Upworthy’s hits and the Facebook policy change.  Although it could be argued that it’s nothing more than a spike in their upward trajectory, which continues.  That might be clearer if you look at the weekly figures, for example: 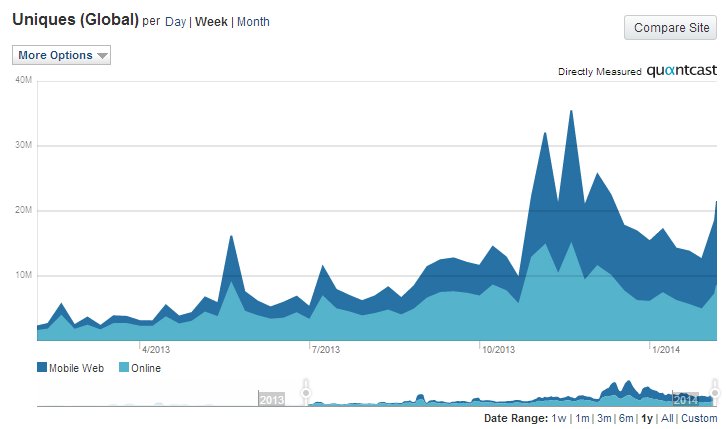 Whichever way you look at it, though, it’s a clear decline from the meme-y heights of December.  And even if the long term is unclear, we can be grateful for the small mercy of a little less Upworthiness – at least for now.

Walter White’s Facebook Movie
How Free Is Our Media?