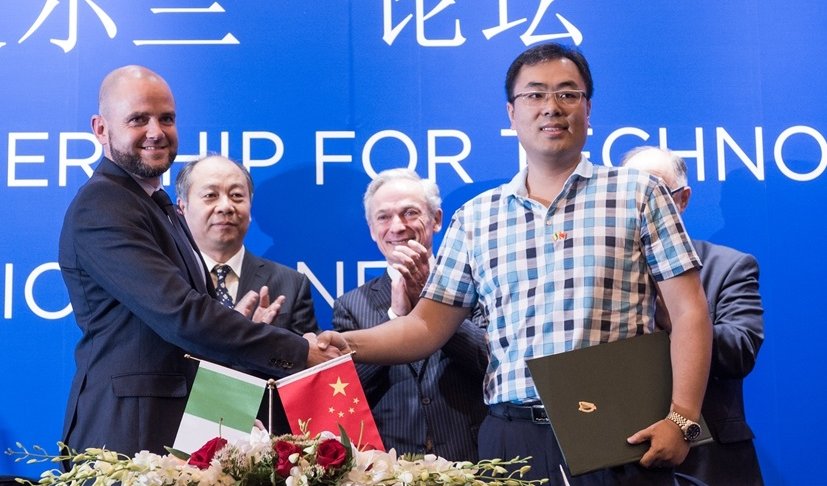 By Conn Ó Muíneacháin on September 16, 2015 in General

Chinese companies, Beijing Bluesky Aviation Technology and Sino TekCo, have awarded contracts valued at a total of $1.45 Million to Arralis, a technology company servicing the aerospace and security sector, founded and based in Limerick. The official signing of the contracts was witnessed by the Minister for Jobs, Enterprise and Innovation, Richard Bruton TD at the Ireland China Conference in Beijing organised by Enterprise Ireland on Monday.

Arralis designs and manufactures high frequency semiconductor chips, modules and antennas up to and beyond 110GHz. Under the Beijing Bluesky Aviation Technology contract Arralis will supply high definition radar sub-systems operating at 94GHz.

Beijing Bluesky Aviation Technology will use Arralis high definition radar technology to develop a system, which will enable commercial helicopters to land blind in degraded visual environment conditions, such as dust clouds (brownout). The system can also be used to detect obstacles which become difficult to identify in bad weather, for example overhead power lines. Conventional radar does not have a high enough resolution for this application, while alternative technologies, for example infra-red and laser cannot be used in extreme weather conditions or poor visibility.

This initial contract will enable Bluesky to carry out prototype development with a view to a future production contract for thousands of the international patent pending Arralis sub-systems.

Sino TekCo will use Arralis high definition radar technology to develop a system of radars which will be used for debris detection and bird tracking at the country’s airports.

The background Arralis 94GHz technology has been developed by the company with the support of the European Space Agency (ESA) and the backing of Enterprise Ireland. The company has also recently announced contracts with the UK Ministry of Defence and ESA.

Build your Own Jony Ive Soundtrack!
Texas Teen Arrested for Making a Clock says He’ll Transfer to “Any Other School”