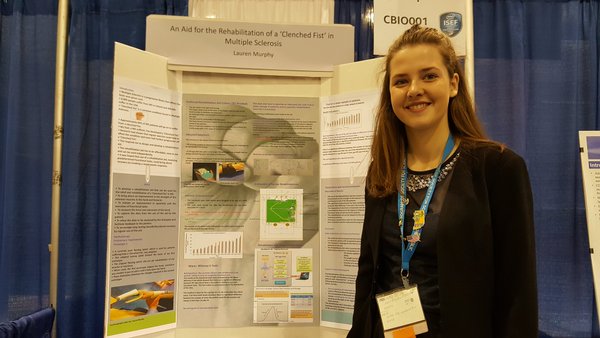 By Conn Ó Muíneacháin on May 17, 2016 in General
8
SHARES
ShareTweet

A total of 3 awards – 2 special awards and 1 category award – were picked up by Irish students attending the annual Intel International Science and Engineering Fair (ISEF), last week in Phoenix, Arizona. 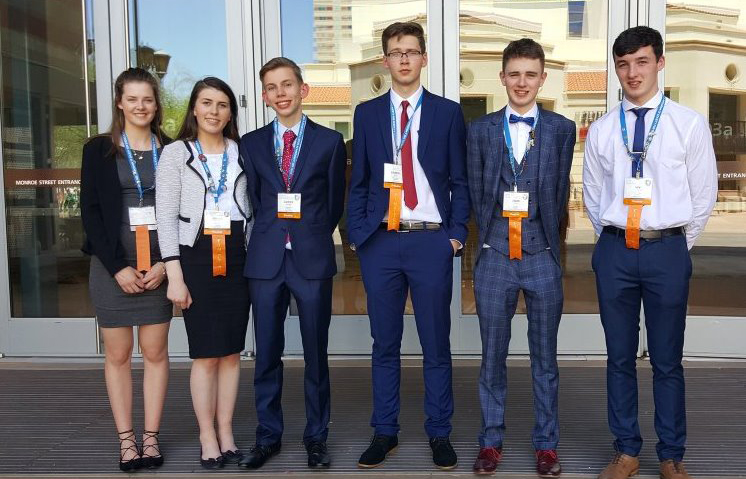 The event, which is the world’s largest high school science research competition, was attended by more than 1,700 young scientists selected from 419 affiliate fairs in 77 countries, regions and territories.

Four teams representing Ireland and Northern Ireland took part, having secured their places at Intel ISEF after they became winners of Intel sponsored prizes at various Ireland and EU based science fairs over the past 12 months.

Lauren Murphy, a transition year student at Loreto Secondary School in Balbriggan, Co. Dublin, was awarded a third place award in the Computational Biology and Bioinformatics category for her project ‘A Rehabilitation Aid for the Treatment of ‘Clenched Fist’ Condition in Multiple Sclerosis.

Lauren’s project involved the development of an aid to assist those with Multiple Sclerosis to perform exercises to improve the action of opening and closing the fist thus helping to alleviate the difficulty of ‘Clenched Fist’. As part of her project Lauren developed a mechanical prototype which includes integrated electronics consisting of a set of sensors and a microcontroller printed circuit board. As part of her award Lauren received a $1000 cash prize. Lauren was selected to attend ISEF after she was named Sentinus Young Innovator 2015. 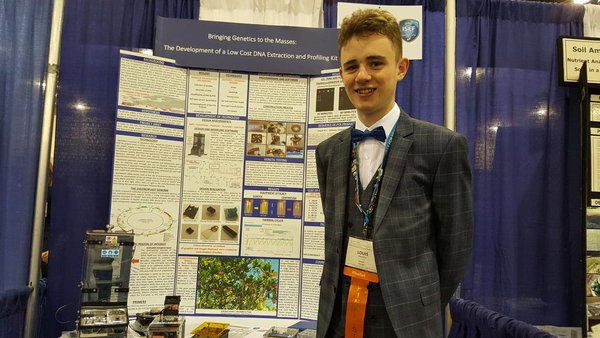 Louis Madden, a fifth-year student from Largy College, Clones, Co Monaghan picked up two special awards at the event for his project ‘Bringing Genetics to the Masses: The Development of a Low Cost DNA Extraction and Profiling Kit’ which competed in the Plant Sciences category. Louis received an award to participate in the “Web Valley” summer school in Trento, Italy from the Fondazione Bruno Kessler as well as a cash award from the Monsanto Company.

Louis’ project looked at whether genetic testing and DNA research can be carried out simply, cheaply and efficiently. He found that important genetic research was often limited by the cost of the necessary equipment. He spent just under €150 on cheap and recycled material to build several pieces of laboratory equipment including a vortex, centrifuge, PCR, transilluminator, gel box with power supply and gel camera. Using this equipment, he isolated and amplified chloroplast DNA using a proprietary DNA extraction kit. Comparing his results with those of other tests of the same material he demonstrated that genetic testing could be done in a simpler, cheaper and more effective manner. Louis earned his place at Intel ISEF after being crowned the overall winner of Scifest in 2015.

Also taking part at Intel ISEF this year were Gabriel Barat and Adrian Wolniak from Synge Street CBS in Dublin with their project ‘A Mathematical Model of Coffee Rust’ which examined how coffee rust disease is a serious economic problem in Central America and proposes a mathematical model that suggests an effective way of limiting its spread. The Dublin students were selected as the Intel student award winners at the BT Young Scientist and Technology Exhibition 2016 and as part of their prize received an all expenses trip to Intel ISEF.

Eimear Murphy and Ian O’Sullivan from Coláiste Treasa in Kanturk, Co. Cork also took part at the event in Phoenix after being selected as prize winners at the EU contest for Young Scientists in Milan last year. The Cork pair were also named the overall winners of the BT Young Scientist and Technology Exhibition in 2015 for their project ‘Alcohol consumption: Does the apple fall far from the tree?’ which involved a detailed study which aimed to identify one potential cause of hazardous drinking in teenagers – parental drinking habits and attitudes to their children’s drinking.

“The fact that the Irish students have once again done so well really is a testament to their hard work and to the standard of their projects”, said Sarah Sexton, Head of STEM Programs at Intel Ireland, who described Intel ISEF as the largest science fair in the world.

“Intel is delighted to be able to sponsor the Irish teams to attend ISEF and we believe that it is so important to recognise and celebrate their achievements. We are very proud of the whole Irish team and hope that these students will be an inspiration to many other young people across Ireland”.

Millions of students from across the world participated in feeder fairs for Intel ISEF over the past 12 months and this year the overall first-place winner, who received the $75,000 Gordon E. Moore Award, was Han Jie (Austin) Wang, aged 18, of Vancouver, Canada who was awarded first place for identifying specific genes in genetically enhanced E. coli bacteria that enabled them to generate power efficiently. Wang’s system can produce significantly more power than existing MFC processes at a cost that is competitive with solar energy, which he believes will make MFCs commercially viable.

The Intel International Science and Engineering Fair 2016 is funded jointly by Intel and the Intel Foundation with additional awards and support from dozens of other corporate, academic, governmental and science-focused organizations. This year, approximately US$4 million was awarded.

The event honours the world’s most promising student scientists, inventors and engineers. Finalists are selected annually from hundreds of affiliated fairs. Their projects are then evaluated on-site by approximately 1,000 judges from nearly every scientific discipline, each with a PhD or the equivalent of six years of related professional experience in one of the scientific disciplines.

Dad Wakes Kid Dressed As Darth Vader [Video]
May the Defence Forces be with You! #Sockies16