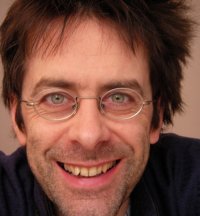 By Conn Ó Muíneacháin on August 20, 2014 in General
0
SHARES
ShareTweet

I’m a fan of Julian Gough. I used to play his band on the radio in the 1990s, and I’ve sneaked a read of one of his novels in a bookshop. One day, I promise, I’ll actually buy one.

That’s the problem right there, for Julian and others like him. He’s got plenty of goodwill and accolades, and a shelf full of literary awards. He’s committed to writing innovative, modern fiction but, he says, mainstream publishing simply does not support writers like himself.

Writers’ incomes have collapsed in the last five years. The average FULL-TIME PROFESSIONAL writer in the UK now earns 11000 pounds a year. Which is not enough to live on. Writers subsidise a global, multi-billion dollar industry by working for far less than the minimum wage.

It’s an old problem, with the added insult that autographed memorabilia of deceased writers can sometimes earn more than all the printed, bound and mass-produced work ever did during their lifetimes.

Good writers are often absurdly, grindingly poor, right to the end. James Joyce wrote the greatest novel of the 20th century, and he died leaving an estate that was valued, in total, at £908. He died broke. Now, even his blandest signed Christmas cards sell for thousands of dollars. In 2004, a single, rather sexy, letter that he wrote to his wife, Nora Barnacle sold at auction for $445,000: the highest price ever reached for a twentieth century autographed letter. Well, that’s the free market doing its wonderful, crazy, amoral thing. But too late for Joyce. These days, the letters and cards of even minor good writers sell for good money. Because they are unique. And we like relics.

Julian calls this a ‘market failure’, and he’s come up with a plan to fix it. If a writer’s work can inspire an aftermarket in memorabilia, why shouldn’t the writer benefit while he or she is still alive. Better yet: why shouldn’t they be able to control and manipulate that market?

He’s calling the idea Litcoin, and he’s just tested it out with a Kickstarter campaign to fund a month’s research in Las Vegas, and allow him to complete his latest novel. It’s been a resounding success, closing  this morning, with $8,676 – that’s 578% of his modest target of $1500.

And the rewards? Signed, personalised postcards, embellished with coffee stains, lipstick and bullet holes, or, for the big spenders, written in the artist’s own blood. It’s an appropriate metaphor for the physical sacrifice of the artist, and an opportunity for fans to provide a meaningful patronage, instead of the trophy-hunting trade in the tusks of the dead.

In a further innovation, Julian has made it a condition of the deal that, should you subsequently sell one of the postcards for greater than $1000, then he’s entitled to a cut of 10%. This is inspired by a French law known as “Droit de Suite“, and it’s only fair, when you think about it. Isn’t it?

In 1879, Millet’s painting, The Angelus, was sold by a copper merchant for 553,000 francs, only 14 years after Millet had sold it for 1000 francs; at the time of the second sale, Millet had just died, leaving his family in dire poverty. Popular outrage in France led to the law. People can change the rules.

Artists such as Amanda Palmer have highlighted the need to find a new way to fund art and to feed artists. Technologists and copyright reformists say that the old models are inappropriate for the digital age, while publishers and record companies lobby for legislation to defeat piracy and defend their revenues. As technology rewrites the rules of culture, Gough is a voice for the artists themselves. He’s not greedy or unreasonable. He is simply saying: “just give me a minute while I draw some blood”.