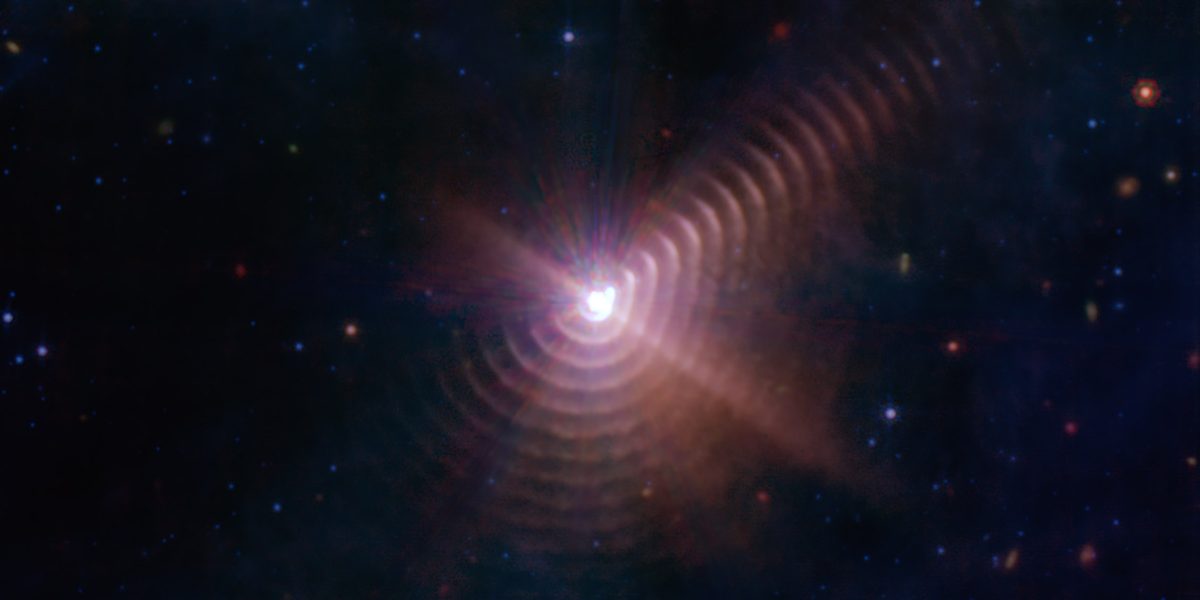 By Jonathan Thomas on October 17, 2022 in Science, Space
0
SHARES
ShareTweet

A new image from the James Webb Space Telescope (JWST) shows at least 17 dust rings – resembling a fingerprint – created by a rare type of star and its companion, locked in a celestial dance.

Each ring was created when the two stars came close together and the streams of gas they blow into space collided, compressing the gas and forming dust.

The orbit of the stars brings them together about once every eight years, and like the rings of a tree’s trunk, the dust loops mark the passage of time.

Ryan Lau, an astronomer at the National Science Foundation’s NOIRLab, said: “We’re looking at over a century of dust production from this system.

“The image also illustrates just how sensitive JWST is. Before, we were only able to see two dust rings, using ground-based telescopes. Now we see at least 17 of them.”

In addition to Webb’s overall sensitivity, the Mid-Infrared Instrument (MIRI) is uniquely qualified to study the dust rings, or what researchers call shells.

This is because it sees in infrared light, a range of wavelengths invisible to the human eye.

The UK Astronomy Technology Centre (UK ATC) played a key role in designing and building MIRI’s spectrometer that was used to reveal the composition of the dust, formed mostly from the material ejected by the star which is a special type known as a Wolf-Rayet star.

This type of star is born with at least 25 times more mass than the Earth’s sun and is nearing the end of its life.

Burning hotter than in its youth, a Wolf-Rayet star generates powerful winds that push huge amounts of gas into space.

The Wolf-Rayet star in this particular pair may have shed more than half its original mass via this process, experts suggest.

Researchers say transforming gas into dust is somewhat like turning flour into bread – it requires specific conditions and ingredients.

Hydrogen, the most common element found in stars, cannot form dust on its own.

But because Wolf-Rayet stars shed so much mass, they also eject more complex elements typically found deep in a star’s interior, including carbon.

The heavy elements in the wind cool down as they travel into space and are then compressed where the winds from both stars meet, like when two hands knead dough.

Researchers say that while some other Wolf-Rayet systems form dust, none are known to make rings like Wolf-Rayet 140 does.

The unique ring pattern forms because the orbit of the Wolf-Rayet star in WR 140 is elongated, not circular.

Only when the stars come close together — about the same distance between Earth and the sun — and their winds collide, is the gas under sufficient pressure to form dust.

The astronomers think WR 140’s winds also swept the surrounding area clear of residual material they might otherwise collide with, which could explain why the rings are so pristine.

Dr Olivia Jones, Webb Fellow at the UK ATC in Edinburgh, and a co-author of the study, said: “Not only is this a spectacular image but this rare phenomenon reveals new evidence about cosmic dust and how it can survive in the harsh space environments.

“These kinds of discoveries are only now opening up to us through the power of Webb and MIRI.”

The findings are published in the journal Nature Astronomy.