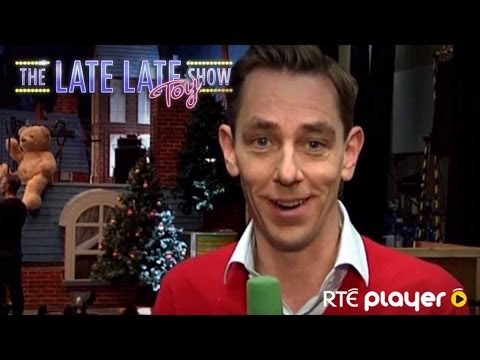 What’s bigger than Black Friday in Ireland?  The Late Late Toy Show is what!  And RTÉ have announced that the live broadcast will be available worldwide tonight on the RTÉ player.

Broadcast rights are bought and sold on a regional basis, and RTÉ generally does not have the right to stream programmes it has bought in.  Similarly, homegrown hits such as Love/Hate have the potential to earn royalties from being licensed abroad, so it would not make sense to give them away for free online.

But the Late Late Toy Show is different.  While it is a huge commercial hit for RTÉ, there is something sacred about it.  Marie-Therese Keegan writes in the Irish Times this week:

For the third year running I am hosting a Late Late Toy Show screening party in my London home. Regrettably I can’t give my kids an Irish childhood but I can offer them a few gems from my own and the Toy Show experience shines bright.

So call it a public service broadcast to the Irish Diaspora.  Of course it’s also true that the commercial shelf life of the Late Late Toy Show is limited to just a couple of weeks, as Christmas purchasing decisions are made.  So there’s very little to be gained by RTÉ from hoarding it.  And the move certainly helps to take the limelight from TV3, who are broadcasting their toy show at 8pm.