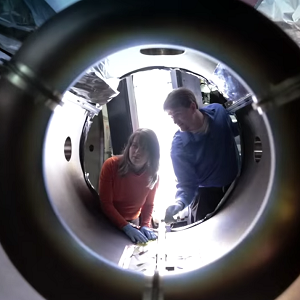 By Conn Ó Muíneacháin on October 17, 2014 in General
0
SHARES
ShareTweet

Scientists at defence manufacturer Lockheed Martin have announced that they are working on perfecting small nuclear fusion reactors which could be ready for industrial use within 10 years.

If true, it could herald an energy revolution, solve the climate change problem and defuse conflict over energy resources.

Scientists have been talking about nuclear fusion for decades. It’s the nuclear reaction that powers the sun, and has the potential to be safer and cleaner than nuclear fission. The challenge of getting it to work at manageable temperatures for industrial use has proved elusive so far.

The company released a video featuring project leader Thomas McGuire, who claims the development would “restart the atomic age”.  He’s so confident of its success within his lifetime, he says he’ll have to find another job when it is done.

However, one commenter on Scientific American reminded readers that we’ve heard all this before.