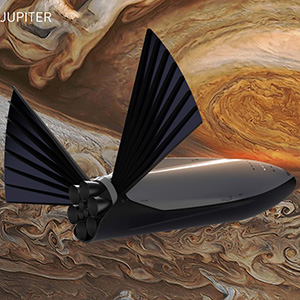 Last night, the CEO of SpaceX, Elon Musk, presented his vision for ‘Making Humans a Multiplanetary Species’. If you missed it, you can see the full presentation here as it was streamed live, or check out the short animated overview below of The SpaceX Interplanetary Transport System.

It’s an ambitious plan (you can download the slides here) and it’s strangely compelling to hear a business person talk about interplanetary travel in a way that makes it sound like real business and real science – not fantasy.

The difference is that Musk is an entrepreneur. SpaceX is not a government agency dependent on congress for its budget; unable to plan beyond a couple of election cycles. It would appear that, when you combine idealism and private enterprise, new possibilities emerge.

Musk addressed this point in his speech, pointing out that the trend-line of human space exploration has actually declined in the past 50 years, from sending men to the moon, to developing the space shuttle for low-earth orbit (and the shuttle has now been retired).

“I think what a lot of people don’t appreciate is that technology doesn’t automatically improve. It only improves if a lot of really strong engineering talent is applied to the problem”

So is this the way to do it? Some think not.

So what do you think? Is Elon Musk right to say that “public-private partnership” is the way to the final frontier? Should we be applying that “engineering talent” to the problems of humanity here on earth? (It could be argued that Elon Musk is doing that too.)

I agree that it would be great if humanity could get together and agree on the public good, transform our economies away from GDP-driven CO2 suicide, and move straight to a Rodenberry-style enlightened society complete with a ‘prime directive’ and attractive aliens in lycra.

But having heard ideas about one-way tickets and funding colonisation with a reality-TV show, Musk’s plans to bring the cost of a ticket to Mars (or back) down to “the median price of a house in America” sound like a breath of fresh air. It’s a vision of homesteader pioneers backed up by solid engineering. Hearing Musk casually mention how reducing the temperature of the liquid methane and oxygen to “close to their freezing points” reduces the likelihood of cavitation, suggests a detailed grasp of the engineering involved. And bringing the journey time down to as little as 12 weeks, depending on the Mars-Earth rendezvous opportunity, makes it a more attractive proposition (along with the possibility of going home).

I get a little nauseous every time I hear a comic-book fan cheer Musk, comparing him Iron Man‘s Tony Stark. Life is not like comics, and no billionaire hero is going to save us from our stupidity and the stupid governments we elect. But neither do I believe that billionaires can’t be idealists, or that billionaire resources can’t be put towards something other than making more billions. No one questions that artists, composers and writers dream of leaving a meaningful legacy. Why not engineers and entrepreneurs? Why not billionaires?