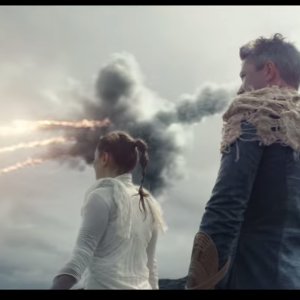 By Conn Ó Muíneacháin on January 21, 2015 in General
1
SHARES
ShareTweet

The Music of the Spheres is an ancient idea that there is a kind of universal music which is related to the movement of heavenly bodies like the Sun, the Moon and the planets. And although it turns out that Comet 67P, the focus of the Rosetta mission, is more of an ugly duckling than a perfect sphere, it has nonetheless inspired musicians and composers to celebrate the recent successes of the European Space Agency.

Composed and produced by Atanas Valkov, the “Ambition” album has just premiered in online music stores and on streaming platforms, including iTunes, Google Play, Spotify, and many others. The album features 15 original tracks of electronic, cinematic, and world music inspired by the Rosetta mission and the ESA’s short film “Ambition” directed by Tomek Bagiński and starring Irish actors Aidan Gillen and Aisling Franciosi. The soundtrack to the film was composed and produced by Atanas.

“It’s a one-of-a-kind sonic voyage into outer space, combining the realms of music, film, and science. What drives human beings to achieve great things is ambition. I felt that I really wanted to pay tribute to the incredible achievement that was the success of the Rosetta mission, so I used the film score, ESA’s sound vault, and my music to produce this feature album”, Atanas said.

Meanwhile, The Rosetta Suite has been conceived by Edward Jonathan Blakeley as a suite of orchestral music inspired by the mission, which

follows the story of the Rosetta mission, its characters, successes and setbacks; all of it painted in vivid orchestral colour

The Rosetta Suite has been fully funded, raising £4,362 on Kickstarter.

TOR for Newbies: How and Why to Use it [Infographic]
Windows 10 Introduces ‘No Screen’ Holographic Interface