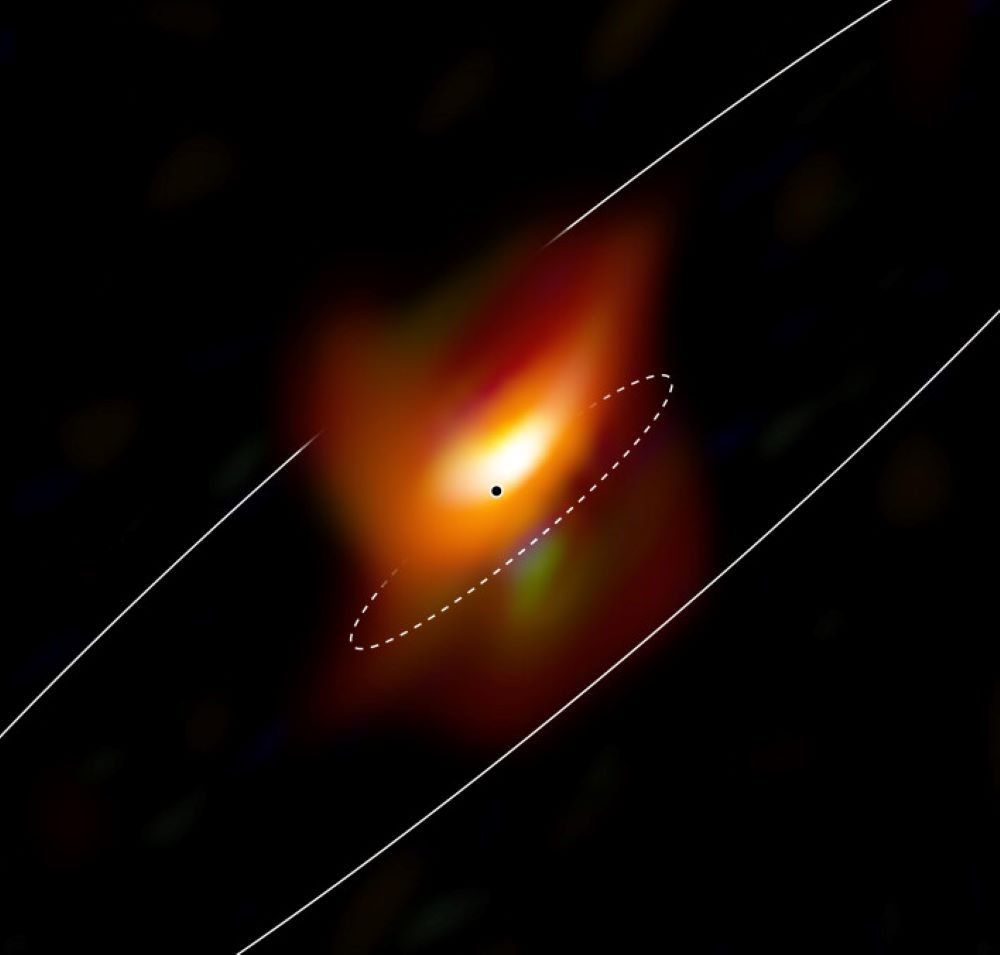 By Jonathan Thomas on February 16, 2022 in Science, Space
0
SHARES
ShareTweet

A supermassive black hole has been caught hiding in a ring of cosmic dust.

The findings confirm predictions made around 30 years ago and give astronomers new insight into some of the brightest and most mysterious objects in the universe – active galactic nuclei (AGN).

They could also help scientists gain a better understanding of the history of the Milky Way, which harbours a supermassive black hole at its centre.

AGNs are powered by supermassive black holes and found in the middle of some galaxies.

These black holes feed on large volumes of cosmic dust and gas.

But before it is eaten up, this material spirals towards the black hole and huge amounts of energy are released in the process, often outshining all the stars in the galaxy.

Detailed images, and analysis of changes in dust temperature – from around room temperature to about 1,200C – allowed the researchers to build a picture of the dust and pinpoint where the black hole must lie.

The astronomers suggest the dust with the black hole at its centre supports a decades-old model.

Violeta Gamez Rosas, from Leiden University in the Netherlands, who led the researchers, said: “The real nature of the dust clouds and their role in both feeding the black hole and determining how it looks when viewed from Earth have been central questions in AGN studies over the last three decades.

“Whilst no single result will settle all the questions we have, we have taken a major step in understanding how AGNs work.”

AGNs were first spotted in the 1950s, and astronomers have been curious about them ever since.

Using the European Southern Observatory’s Very Large Telescope Interferometer (ESO’s VLTI), researchers have taken a step towards understanding how they work and what they look like up close.

By making detailed observations of the centre of the galaxy Messier 77, the astronomers detected a thick ring of cosmic dust and gas hiding a supermassive black hole.

They say this discovery provides vital evidence to support a 30-year-old theory known as the Unified Model of AGNs.

Astronomers know there are different types of AGN, with some appearing brighter than others,  and the model states that despite their differences, they all have the same basic structure – a supermassive black hole surrounded by a thick ring of dust.

According to this model, any difference in appearance between AGNs results from the angle at which the black hole and its thick ring are seen from Earth.

The type of AGN seen depends on how much of the space dust ring blocks the black hole from view, sometimes completely hiding it.

Astronomers had found some evidence to support the Unified Model before, including spotting warm dust at the centre of Messier 77.

However, doubts remained about whether this dust could completely hide a black hole and hence explain why this AGN shines less brightly in visible light than others.

Ms Gamez Rosas said: “Our results should lead to a better understanding of the inner workings of AGNs.

“They could also help us better understand the history of the Milky Way, which harbours a supermassive black hole at its centre that may have been active in the past.”

The findings are published in Nature.