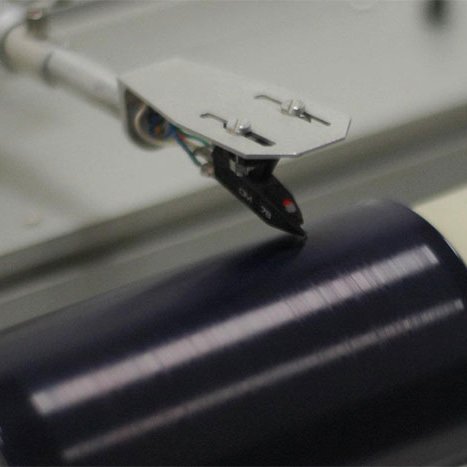 UCC has digitised and published an important archive of Irish traditional music contained on wax cylinders, which languished unheard in its basement for almost 100 years.

The problem with wax cylinders is that they are damaged each time you play them, so that for the archive to be preserved it could not be played.

But an audio engineer named Henri Chamoux found a way to unlock the sounds of the past with his invention: The Archéophone.

In this video, Henri explains that vintage phonograph equipment used a purely mechanical process in which vibrations from the needle in wax were amplified through a cone. Typically this involved a weight of about 50g concentrated at the point of the needle, which destroyed the recording as it reproduced it.

Henri’s Archéophone is able to reproduce and amplify the sound electrically, with just 2 or 3 grammes of pressure on the point of the needle, depending on the quality of the cylinder.

University College Cork has a collection of 114 wax cylinders, some broken, most in “fair to good condition”. They are the result of an extraordinary collaboration between two famous collectors of traditional music at the turn of the 20th Century: Chicago Police Chief Francis O’Neill, and scholar and priest Rev Dr Richard Henebry. The collection was given to UCC by Dr Henebry, who was Professor of Irish at the University, in the hopes of building an archive of traditional music.

Such an archive exists today, and what’s more, Irish music is immensely popular around the world. Today’s recording technology would be unimaginable  to those early pioneers, but it’s thanks to them that the archives include such early examples of tradition.

Technology.ie is brought to you by Blacknight, Ireland’s leading provider of domain names and web hosting.

Irish Schools Compete to Design a Satellite in a Can
Colbert to Nerds: Relax! New Lightsaber is Cool