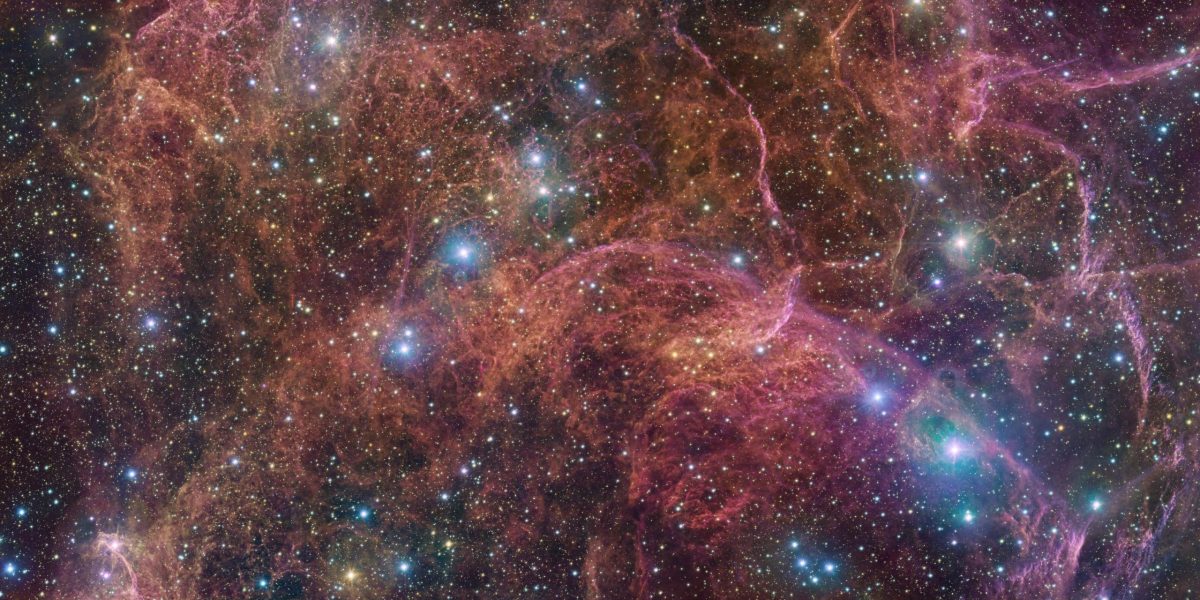 By Jonathan Thomas on October 31, 2022 in Science, Space
26
SHARES
ShareTweet

The ghostly remains of a giant star reveal a tapestry of colours and waves.

After a massive star’s life ended in a powerful explosion some 11,000 years ago, the wispy structure of pink and orange clouds is all that remains.

When the biggest stars reach the end of their lives, they often go out with a bang, in an outburst called a supernova.

The explosions cause shockwaves that move through the surrounding gas, compressing it and creating intricate thread-like structures.

The gaseous tendrils are heated by the energy that is released, making them shine brightly, as seen in the image captured in detail with the VLT Survey Telescope, hosted at the European Southern Observatory’s (ESO’s) Paranal site in Chile.

The new 554-million-pixel image provides an extremely detailed view of the Vela supernova remnant, named after the southern constellation Vela (The Sails).

Experts say nine full moons can fit in this entire image, and the whole cloud is even larger.

At only 800 light years away, this supernova remnant is one of the closest known to Earth.

As the star exploded, its outermost layers were ejected into the surrounding gas, producing the spectacular filaments.

What remains of the star is an ultra-dense ball in which the protons and electrons are forced together into neutrons – a neutron star.

The neutron star in the Vela remnant is a pulsar that spins on its own axis at an incredible speed of more than 10 times per second.