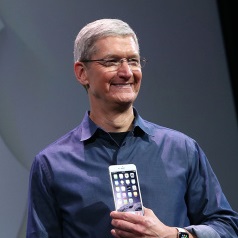 By Conn Ó Muíneacháin on October 30, 2014 in General
0
SHARES
ShareTweet

Tim Cook, CEO of Apple, has publicly declared that he is gay, in an editorial published today in Bloomberg BusinessWeek.

He writes that he has been “open with many people” about his sexuality for many years, but that coming from “humble roots”, he doesn’t seek to draw attention to himself. However, he says that he came to realise that his desire for personal privacy was holding him back from doing something more important.

While I have never denied my sexuality, I haven’t publicly acknowledged it either, until now. So let me be clear: I’m proud to be gay, and I consider being gay among the greatest gifts God has given me.

Citing Martin Luther King Jr and Robert F Kennedy  as inspirations, Mr Cook says that he does not consider himself an activist and does not believe he is in the same league as the pioneers of the Civil Rights movement. But he says that he is aware that he has benefited from the sacrifices of others.

So if hearing that the CEO of Apple is gay can help someone struggling to come to terms with who he or she is, or bring comfort to anyone who feels alone, or inspire people to insist on their equality, then it’s worth the trade-off with my own privacy.

The full editorial can be read at Bloomberg BusinessWeek.