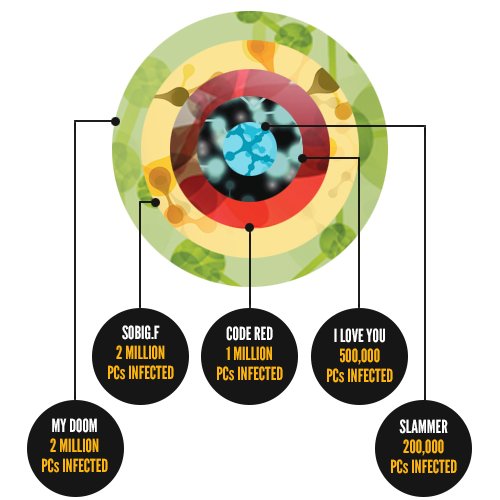 By Conn Ó Muíneacháin on February 18, 2014 in Infographic
3
SHARES
ShareTweet

If large scale computer virus epidemics seem like a thing of the past, it’s only because we’ve learned the lessons of vigilance. Software updates, firewalls and anti-virus mean that outbreaks on the scale of these five are rarely seen nowadays, but it’s worth reminding ourselves why we can’t relax about security. To err is human, but to royally screw things up takes a global network of computers, like the one we’ve got!

This infographic from Norton catalogs the five worst viruses in history based on speed, spread and cost. If you used a computer in the early 2000s you’re sure to remember at least one of these – although if if you remember those days as one big blur of fear and anxiety, that’s understandable. It’s OK, you’re safe now.

Five Most Catastrophic Viruses of All Time Infographic