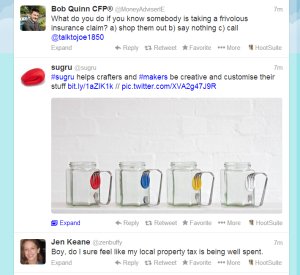 Users of Twitter on the Web and its mobile clients, discovered yesterday that previews of media shared with Twitter and Vine are showing up inline as you scroll through your stream.

This only works with Twitter’s own media sharing tools, not, for example, with Instagram.

Twitter hopes it will make the experience more engaging – and encourage users towards the web version and its proprietary mobile clients, rather than third party apps.  There have been some complaints from users who are upset that it is polluting the clean twitter experience.  The feature can be turned off in the mobile clients, but not on the web page.

Just call it “Summit” – you know, like Bono
Geeks on a Train – The Infographic