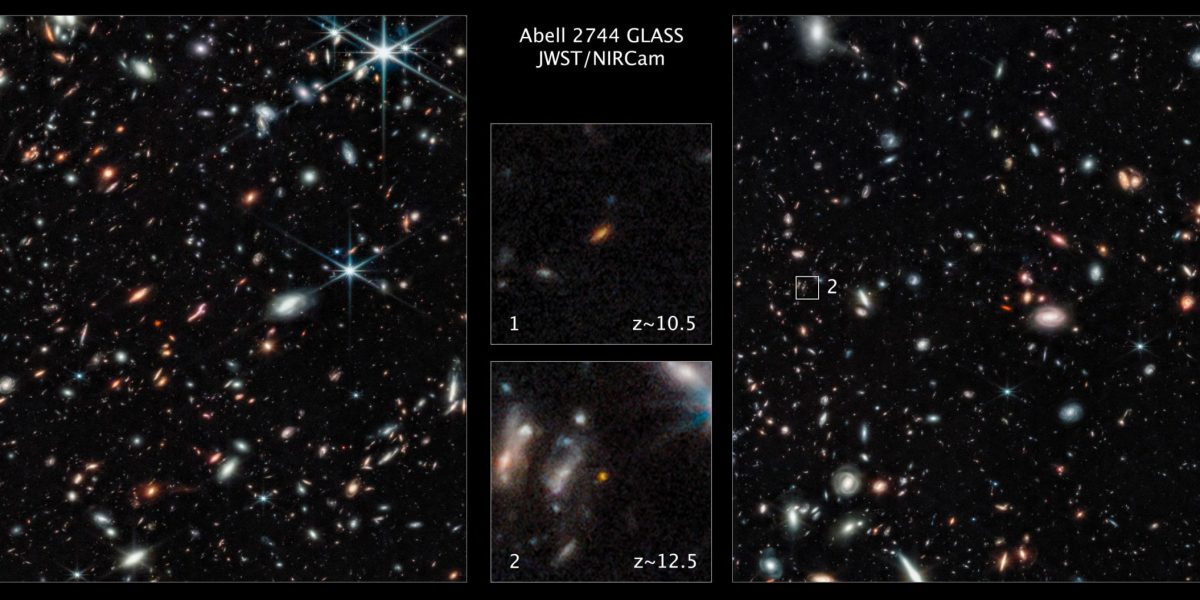 By Jonathan Thomas on November 18, 2022 in Science, Space
0
SHARES
ShareTweet

Nasa’s Webb Space Telescope is finding bright, early galaxies that until now were hidden from view, including one that may have formed a mere 350 million years after the cosmic-creating Big Bang.

Astronomers said that if the results are verified, this newly discovered throng of stars would beat the most distant galaxy identified by the Hubble Space Telescope, a record-holder that formed 400 million years after the universe began.

Launched last December as a successor to Hubble, the Webb telescope is indicating stars may have formed sooner than previously thought – perhaps within a couple of million years of creation.

Webb’s latest discoveries were detailed in the Astrophysical Journal Letters by an international team led by Rohan Naidu, of the Harvard-Smithsonian Centre for Astrophysics.

Mr Naidu said more observations are needed in the infrared by Webb before claiming a new distance record-holder.

Although some researchers report having uncovered galaxies even closer to the creation of the universe 13.8 billion years ago, those candidates have yet to be verified, scientists stressed at a Nasa news conference.

Some of those could be later galaxies mimicking earlier ones, they noted.

“This is a very dynamic time,” said Garth Illingworth, of the University of California, Santa Cruz, a co-author of the article.

“There have been lots of preliminary announcements of even earlier galaxies, and we’re still trying to sort out as a community which ones of those are likely to be real.”

Tommaso Treu, of the University of California, Los Angeles, a chief scientist for Webb’s early release science programme, said the evidence presented so far “is as solid as it gets” for the galaxy believed to have formed 350 million years after the Big Bang.

If the findings are verified and more early galaxies are out there, Mr Naidu and his team wrote that Webb “will prove highly successful in pushing the cosmic frontier all the way to the brink of the Big Bang”.

“When and how the first galaxies formed remains one of the most intriguing questions,” they said in their paper.

Nasa’s Jane Rigby, a project scientist with Webb, noted that these galaxies “were hiding just under the limits of what Hubble could do”.

“They were right there waiting for us,” she told reporters.

“So that’s a happy surprise that there are lots of these galaxies to study.”

The 10 billion dollar (£8.4 billion) observatory – the world’s largest and most powerful telescope ever sent into space – is in a solar orbit that is one million miles from Earth.

Full science operations began over the summer and Nasa has since released a series of dazzling snapshots of the universe.