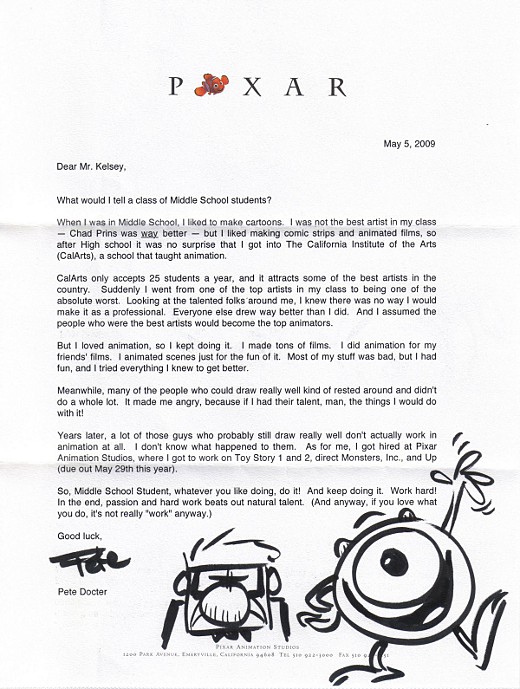 By Alan O'Flaherty on August 17, 2012 in General
0
SHARES
ShareTweet

It was in response to a question from a teacher who asked for some advice to give to students.

“So, Middle School Student, whatever you like doing, do it! And keep doing it. Work hard! In the end, passion and hard work beats out natural talent. (And anyway, if you love what you do, it’s not really “work” anyway.)”

Students all over Ireland received their Leaving Certificate results this week. A large proportion of the headlines concentrated on the ‘A’ listers – those students getting all A1 results in their selected subjects.

The other headline grabbing statistic widely reported was the increase in Higher Maths students. There was a 35% rise in those opting to take the exam and receiving 25 bonus points for achieving a Grade D or above. The bonus point system was brought in by the Irish government to encourage more students to take up further study in science and technology fields.

This is all very well but there’s one critical point to consider – not everyone has an aptitude/grá/passion for maths and science subjects. The chickens are coming home to roost now, with the Irish Times reporting that the Minister for Education is set to review the system. Career experts are “predicting a dramatic increase in points for many courses when the CAO publishes its first round of college offers next Monday”. It may turn out that those students who have a passion for science/maths/technology will be squeezed out of their chosen course due to the bonus point system.

There’s a very interesting TED Talks video by Sir Ken Robinson. In it :

he makes the case for creating an education system that nurtures (rather than undermines) creativity. He champions a radical rethink of our school systems, to cultivate creativity and acknowledge multiple types of intelligence.

Towards the end of the lecture (fast forward to about 15:15) he tells the audience about Gillian Lynne.

If you haven’t the time to watch it, here’s the really quick version.

Gillian Lynne is an award winning chereographer who has worked on Cats and Phantom of the Opera. The school wrote to her mother to say they thought Gillian had a learning disorder. She couldn’t concentrate and fidgeted constantly in the classroom. Today, she would probably be diagnosed as having ADHD – but it hadn’t been invented back in the 30s.

Her mother took her to see a specialist. They discussed the issues for some time. At the end, the doctor and Gillian’s mother left the room to talk things over. Before he left, he turned on the radio.

And when they got out of the room, he said to her mother, “Just stand and watch her.” And the minute they left the room, she said, she was on her feet, moving to the music. And they watched for a few minutes and he turned to her mother and said, “Mrs. Lynne, Gillian isn’t sick; she’s a dancer. Take her to a dance school.

Gillian did go to dance school and said “I can’t tell you how wonderful it was. We walked into this room and it was full of people like me. People who couldn’t sit still. People who had to move to think.”

Sir Ken finished off this story by saying “She’s been responsible for some of the most successful musical theatre productions in history; she’s given pleasure to millions; and she’s a multi-millionaire. Somebody else might have put her on medication and told her to calm down.”

One wonders how Gillian and Pete Doctor fare today in an education system that values maths and science above others, and the only students to get headlines are the ones with all the A1 grades.

Tech and gadget lover since I was knee high to a grasshopper. "In between" full time job roles at the moment. Blogging sporadically at lecraic.com since 2008. Founder of Wiser.ie - a not for profit, free email advice service staffed (eventually) by volunteers in the 60+ age category.
View all posts by Alan O'Flaherty →