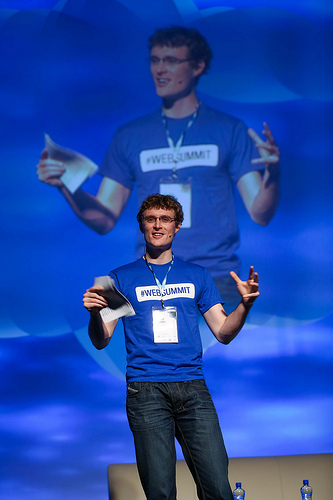 By Conn Ó Muíneacháin on May 9, 2014 in General, Opinion
23
SHARES
ShareTweet Paddy Cosgrave says he thinks Trinity degrees are worth more than those from other universities because of ‘grade inflation’. But the research he quotes says Trinity’s grade inflation is as bad, if not worse.

Yesterday, The Summit announced that it is creating 40 new jobs.  But cheers turned to boos, when it emerged that the operator of the hugely successful event dubbed “Davos for geeks”,  does not view the credentials awarded by Irish universities equally.

Summit founder Paddy Cosgrave has been quick to point out that, when it comes to senior roles, he values experience and entrepreneurialism more than college grades. It makes sense. But for the six positions advertised on The Summit’s graduate internship programme, it also makes sense to operate a grades guillotine.

The problem is that the axe does not apply equally to all colleges.  The Summit will accept internship applications from graduates with a 1st class honours primary degree from any of the following universities: UCD, UCC, DCU, UL, or Maynooth. But if you’ve got a primary degree from Trinity College Dublin, they’ll take your CV with just a 2.1.

Speaking on Today FM’s The Last Word with Matt Cooper yesterday, Cosgrave admitted that he himself got a 2.1 at Trinity. On Pat Kenny’s show, he suggested that ‘grade inflation’ had devalued the degrees awarded by universities other than Trinity, which he said was superior because its degree programme was four years, rather than three. He also talked about an undergraduate competition he was involved in 2011, which had been disproportionately dominated by successful entries from Trinity College.

Criticism has been scathing. As well as pointing out that other universities operate four-year degree programmes, many have questioned Paddy’s basic premise in relation to grade inflation. In his interview with Pat Kenny, he referred to a 900% increase in firsts awarded at Maynooth over 20 years. However, that same research found that Trinity’s ‘grade inflation’ in the same period was higher than that of UL, NUIG or DCU.

Contacted by Technology.ie this morning, a spokesman for The Summit said that Paddy Cosgrave was travelling and currently unavailable to comment. He reiterated that the grades guillotine applied only to the six internships and not to the other vacancies advertised.  As a company, the spokesman said, The Summit has no comment to make on the general question of grade inflation in third-level institutions.

Does Paddy have a point? He may indeed have, and it would be very interesting to hear more about Trinity’s domination of The Undergraduate Awards in 2011. If it’s true that standards are so radically different among universities, then current and prospective students have a right to know, and the colleges and accrediting bodies such as the HEA have questions to answer.

If it is not true, then I, for one, would like to hear more from Paddy.

Update, 12 May 2014: Paddy Cosgrave has responded to criticism over the weekend. He admits the evidence from The Undergraduate Awards is “imperfect” and he’s promised a more detailed post in the coming week, in which he will explain his position. And he makes this point, which I agree with:

“if disparities exist, students should I believe know about them. And they should also know if overall standards in teaching and learning outcomes have fallen for their college. That knowledge, properly measured and tied to incentives for colleges, and then openly shared, would I think encourage colleges to stay focused on preserving or improving the standards in student education that have been built up over decades.”

I look forward to reading more.