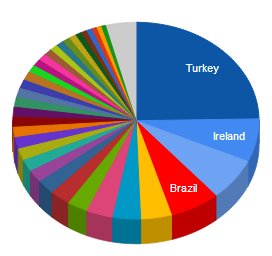 As reported in The Sunday Times yesterday, the Consumers’ Association of Ireland has more Twitter followers in Brazil than in Ireland, having jumped from about 300 followers to 3663 in a matter of hours last Monday. Blogger Paul Duggan examined their Twitter followers using Twitteraudit:

A whopping 1707 of The CAI’s twitter followers speak Spanish, Because the price of a pint of milk in Tesco’s Dundrum is an issue in Latin America.

Una Sinnott decided to take a look at the CAI’s Facebook page using FanpageKarma and found that over 90% of their Facebook fans are outside Ireland.  The greatest number are in Turkey – more than 3 times the number in Ireland.

Una and Paul joined me for a podcast last night (26:05, 15MB, MP3) – together with Mark Tighe who wrote the story for the Sunday Times.  Mark reports that the CAI has received government funding for the purpose of improving its profile in “media and social media”.