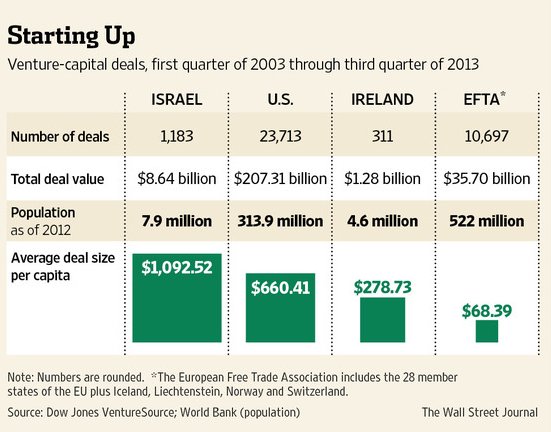 By Conn Ó Muíneacháin on November 22, 2013 in General
0
SHARES
ShareTweet

Why can’t Ireland be more like Silicon Valley, is something we often hear.  Well it turns out we’re the closest thing in Europe when it comes to VC investment, according to research published by the Wall Street Journal, which reveals that “high entrepreneurial activity” is most evident in the northwest of the continent, with Ireland in the lead, followed by Sweden, the UK, Finland, Denmark, the Netherlands, Norway, France, Germany and Switzerland.

The measure used is that of venture capital funding per head of population; so that, while Ireland attracts far less VC investment than, say, the UK, when you divide the total by our population you get a much bigger number.  Using Dow Jones VentureSource Data, WSJ journalist Ben Rooney calculates that the $1.28 billion of VC funds invested in Ireland since 2003 works out at $278.73 per head of population, or 4 times the figure for the European Free Trade Asssociation as a whole.

Despite Ireland’s battering during the financial crisis, the country’s tech startups fared relatively well. Of Ireland’s 311 VC-backed deals since 2003, 131, or 42%, came in 2009 or later, VentureSource says. By contrast, the U.K. closed 1,441 such deals, or just 34% of its 10-year total of 4,208, in the postcrisis period. And across Europe as a whole, the past five years account for 39% of the total for the decade.

Unfortunately the research shows we’re the stars of a very weak league: