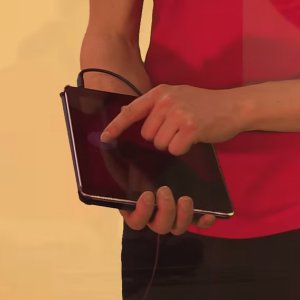 Here’s a preview of a new App launching in a couple of weeks which turns your tablet into an expressive musical instrument.

Intunative is the first product from Surface Tension, a spin out from NUI Maynooth, founded by Music Technology graduates Simon Kenny and Patrick McGlynn. They used the prize money from the University’s annual Student Entrepreneur competition as seed capital to develop it.

Described as “a new musical instrument for tablets which enables you to sculpt sound with a unique gestural interface”, Intunative is a synth engine, sampler and touch screen controller all rolled into one. It’s designed for expressive performance, responding to finger movement on the whole screen as well as the tilt of the tablet.

Intunative is scheduled for release on Dec 22 as an iPad and Android App. A Microsoft Surface port is planned for later in 2015.