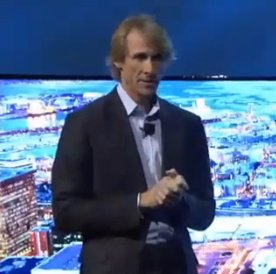 Action movie director Michael Bay may have seemed like the perfect person to promote Samsung’s new 105-inch curved TV at CES. His over-the-top special effects and action sequences would seem to be the perfect way to showcase the latest in display technology.

But it would appear that the director is happier when he’s behind the camera.  After having difficulty with the autocue he announced that he would try to “wing it”, but he left the stage moments later leaving Samsung Executive VP Joe Stinziano to carry the can.

Later Bays blogged that he had embarrassed himself, but I’m sure Samsung are happy with the publicity.  There are hundreds of product announcements competing for attention this week in Las Vegas.  This one just got some extra.

As for the product itself, will “curved” be the fad of 2014 at CES?  Both Samsung and LG in particular are touting the benefits of curved screens for TVs and phones.  The idea is that it provides a more immersive experience and improves the peripheral view, but at least one reviewer found himself “wishing it was flat”.

Taiwan says No to Bitcoin ATMs
Woof – You’ve Got Mail!