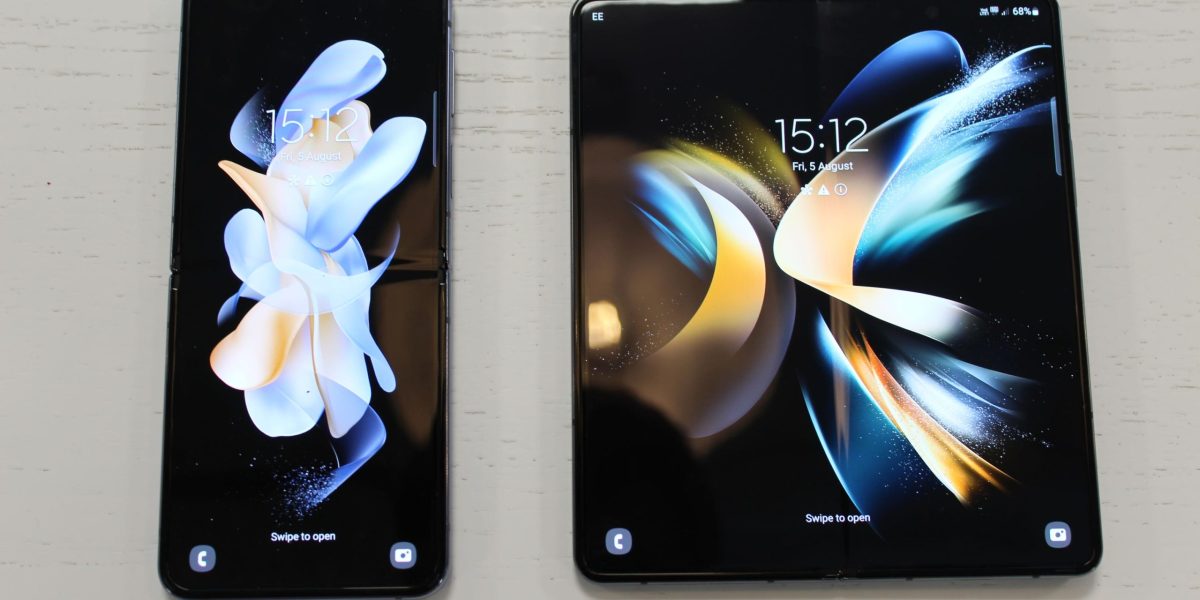 By Jonathan Thomas on August 15, 2022 in Gadgets, Mobile
0
SHARES
ShareTweet

Samsung has unveiled a new generation of foldable smartphones as the tech giant continues its push to bring flexible-screen devices to the mainstream.

The Fold4 has been given a substantial camera upgrade and features the triple camera system found in Samsung’s flagship S22 handset, while the cover screen on the outside has been slightly increased in size and a new PC-style taskbar has been built into the software to speed up jumping between apps.

The Flip4 has undergone a more modest upgrade, with improvements to the small cover screen used to view notifications when the device is closed and expanded camera features when the phone is open, which enable users to change the layout of the viewfinder and camera controls to get different angles.

The two phones will also come with better battery life.

Both phones will go on sale on August 26.

“Samsung Galaxy foldables are built on the foundation of our openness philosophy, enabling new possibilities with complete customisation both inside and out,” said Conor Pierce, corporate vice president of Samsung Electronics UK and Ireland.

“Created in collaboration with our world-class partners, the next foldable devices offer unparalleled mobile experiences that meet the needs of our most dynamic users.

“With our all-new Galaxy Z Flip4 and Galaxy Z Fold4 devices, we’ve pushed the limits of what’s possible with two radically different smartphone experiences that allow people to express their individuality – because there’s no one-size-fits-all for foldables any more.

“With this launch, we’ve successfully transformed this category from a radical project to a mainstream device line-up enjoyed by millions worldwide.”

Samsung still regards the devices as ultra-premium and aimed at tech enthusiasts, but wants to continue developing the category.

James Manning Smith, industry expert and senior analyst at CCS Insight, said: “The Z Flip4 and Z Fold4 will be almost indistinguishable from their predecessors to most consumers. Although Samsung may be criticised for this, it makes sense to take an iterative approach, given foldables devices are currently such a small segment of the overall smartphone market.

“In most cases, a consumer buying one of Samsung’s new devices will be getting one for the first time so won’t really have anything to compare it with.

“We suspect it is still learning lots about the complexities of engineering this new category of products and although the phones look very similar to earlier models, they include numerous improvements such as better durability, longer battery life and multiple user experience updates.”

Samsung’s key smartphone rivals – Apple and Google – are yet to release a foldable device, and while other manufacturers have entered the space, none has yet grabbed the public’s attention.

“Samsung has been the market-maker for foldable smartphones over the last three years, and although several Chinese phone-makers are now offering rival products, Samsung is in a very strong position globally,” Mr Manning Smith said.

“The company will be hoping these products help build on the momentum it has created.”

Samsung also unveiled the Galaxy Watch5 and Watch5 Pro and a new set of wireless earphones, the Galaxy Buds2 Pro.