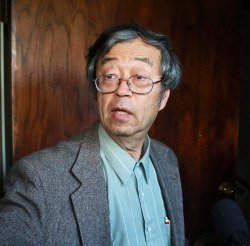 By Conn Ó Muíneacháin on March 7, 2014 in General
29
SHARES
ShareTweet

As expected, Newsweek’s claim to have identified the founder of Bitcoin, turned into a media frenzy yesterday, with an OJ-style paparazzi car chase and a storm of online criticism of the actions of the professional media, in particular Newsweek, and the story’s author Leah McGrath Goodman.

Bitcoin Foundation Chief Scientist Gavin Andresen posted an open comment to Goodman on Reddit, saying he was disappointed that she had chosen to publish so much personal information about Dorian Nakamoto and his family, and he tweeted that he regretted talking to her.

Dorian Prentice Satoshi Nakamoto gave an interview to AP yesterday in which he categorically denied having any involvement with Bitcoin, claiming that he had never heard of it until a few weeks before when his son passed on a message with questions from Newsweek.

And most significantly he claimed that a statement he had made which Goodman had taken as a tacit admission had been misunderstood.

“I’m saying I’m no longer in engineering. That’s it,” he said of the exchange. “And even if I was, when we get hired, you have to sign this document, contract saying you will not reveal anything we divulge during and after employment. So that’s what I implied.”

“It sounded like I was involved before with bitcoin and looked like I’m not involved now. That’s not what I meant. I want to clarify that,” he said.


Perhaps the the most significant rebuttal of Newsweek’s story has come from an online account believed to be associated with the real Satoshi Nakamoto.  Breaking a 4 year silence, he posted:

I am not Dorian Nakamoto.